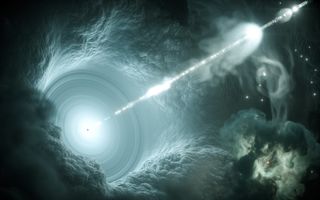 An artist's illustration shows the supermassive black hole at the center of a blazar galaxy emitting its stream of energetic particles toward Earth.
(Image: © DESY, Science Communication Lab)

A single, high-energy neutrino struck Earth on Sept. 22, 2017. It came from a distant galaxy, wrapped around a supermassive black hole. And, beginning with a blockbuster paper published today (July 12) in the journal Science and signed by hundreds of scientists spread across dozens of laboratories, it's leading giddy astrophysicists to rewrite their models of the universe.

That's because, for the first time, this high-energy neutrino, a ghostly particle that barely interacts with other matter, left enough clues for them to figure out where it came from.

For 4 billion years, this neutrino soared through space undisturbed. It might have passed stars, chunks of rock, or other galaxies. It might even have passed through them; neutrinos can usually stream through matter without leaving any trace. So, for most of the time it took life on Earth to emerge, to form bacteria, fungi, plants and animals, and for one of those animals (us) to discover their existence, this neutrino traveled undisturbed. [The 18 Biggest Unsolved Mysteries in Physics]

Then it crashed into an atom in a block of ice in Antarctica, spat another high-energy particle called a muon into the IceCube Neutrino Observatory, a massive particle detector buried under the Antarctic ice, and it disappeared forever.

A thin stream of high-energy neutrinos from deep in the cosmos slam into Earth all the time. But this neutrino collision was special: Scientists were ready for it. Years of refinement to their instruments had prepared them to spot the neutrino, quickly figure out what part of the sky it came from, and then point telescopes from all over the world at that patch of sky. It wasn't the first time they tried this, but this time it worked: The Fermi Gamma-ray Space Telescope — and then dozens more observatories all over the world — caught the faint signal of the neutrino's home galaxy — termed a "blazar" thanks to its blaze of electromagnetic energy firing toward Earth — flaring.

There's a blazar deep in space, the researchers concluded, part of the brightest family of objects in the universe: galaxies with supermassive black hole engines firing beams of energy toward Earth. And this blazar is accelerating neutrinos to enormous energies, and flinging them into our planet.

Tracking down a source of cosmic neutrinos would not have been possible at all without IceCube, according to Derek Fox, an astrophysicist at Pennsylvania State University, whose team led a crucial portion of the research. [IceCube Photos: Physics Lab Buried Under Antarctic Ice]

The vast majority of neutrinos streaming through our bodies every day, Fox told Live Science, form in Earth's atmosphere — the products of collisions between the gas and other high-energy cosmic particles. Even those few instruments around the world sensitive enough to detect neutrinos, he said, are more or less blinded to the much rarer cosmic neutrinos by the "fog" of local neutrinos obscuring the view.

But in 2013, IceCube pierced that fog. The observatory had gotten sensitive enough to sift out the higher-energy cosmic neutrinos from the background radiation of their lower-energy atmospheric cousins. The paper announcing that discovery in Science in 2013 was itself a huge result for neutrino science — the first direct proof of neutrinos that originated so far away.

The next important step, according to Regina Caputo, a particle astrophysicist at the University of Maryland who led the Fermi telescope team that first spotted the flaring blazar along the neutrino's path, was figuring out how to most effectively use that neutrino data to hunt down the particles' sources. [Strange Quarks and Muon: Nature's Tiniest Particles Dissected (Infographic)]

That's where Fox's team came in. Azadeh Keivani, an astrophysicist who was at the time a postdoctoral researcher working in Fox's lab and is now a fellow at Columbia University, said that IceCube was taking too long to detect cosmic neutrinos for the information to be easily usable.

"At the fastest possible, it would take a few hours, and we got it down to less than a minute," Keivani told Live Science.

At that speed, IceCube could alert observatories all over the world just moments after an interesting detection happened, she said. IceCube could already follow the neutrino's path closely enough (by studying the muon it emitted) to narrow down its source to a patch of sky about twice as wide as a full moon. Getting that information out quickly allowed a whole battery of the world's most sensitive telescopes to scan that space — still a very wide search area in astronomical terms, according to Caputo — for hints of where it came from.

When the neutrino, now named IceCube-170922A, struck the detector, Darren Grant was sitting in his office at the University of Alberta. The IceCube spokesperson and astrophysicist said that it was notable — interesting enough to chat about with a colleague down the hall — but not shocking.

"IceCube detects neutrinos [at this energy level] about once a month," Grant told Live Science. "It becomes sort of routine."

Eleven other neutrinos at that energy level had previously struck the detector since the collaboration with other telescopes began, Fox said, and none had yet been traced back to its source.

So the alert went out, observatories all over the world pointed their telescopes at the patch of sky it came from, and then, Fox said, nothing happened…for days.

"It didn't seem like there was anything remarkable there on the sky," he said. Astronomers noted the blazar, but it didn't jump out at them as a likely source. "To us, at that point, it was sort of just neutrino number 12, and we put it on the list [and moved on]."

But then, a few days later, researchers at Fermi sent out an alert: That blazar was flaring. The gamma-ray telescope had spotted it emitting eight times more gamma rays than usual, the brightest it had ever been. Something — researchers don't know precisely what — was causing the galaxy to emit a jet of super-fast high-energy gamma photons. That same process could have emitted the neutrino.

Fermi, a very wide-angle observatory sensitive to a key portion of the gamma-ray spectrum, was well-attuned to the gamma radiation coming from the blazar, and had noticed it flaring as far back as April. And once it had spotted this likely source — which didn't jump out to other telescopes that day because they weren't as sensitive to that region of the spectrum — other telescopes could follow up to confirm the blazar as the likely neutrino source.

"We were​ able to say, 'Oh, it's probably coming from this blazar.' Then, all of the other telescopes could really zero in and point to that particular source," Caputo said.

Another gamma-ray observatory, MAGIC in the Canary Islands off the west coast of Africa, then made follow-up observations that helped confirm this blazar, TXS 0506+056, as the neutrino's source, she said. Many more observatories eventually turned up similar results. For the first time, astrophysicists had identified the source of a cosmic neutrino. Later, researchers poring over old data showed that several more neutrinos detected in the previous nine and a half years at IceCube likely came from the same blazar. That result was also published today (July 12) in the journal Science.

While both Caputo and Fox said they had suspected blazars were involved in cosmic neutrinos, and the idea had been popular for many years (Fox pointed to a paper published on the preprint journal arXiv in 2001 speculating that this exact blazar might be a neutrino source), it had fallen out of favor. Researchers began to worry, Fox said, that there just weren't enough blazars in the sky to account for all the different directions cosmic neutrinos come from.

This result is a "first step" and "proof of concept," Grant said, showing first that at least some neutrinos come from blazars.

However, Caputo said, researchers still don't know just how the blazar produces the neutrinos. (Though there are also accompanying papers starting to work out the physics.) And there are likely other types of neutrino sources out there that researchers have yet to detect. Researchers have crossed the threshold into precise neutrino astronomy, Grant said. But there's a lot more to learn.