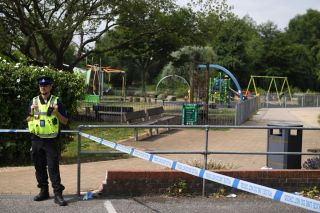 A police officer stands at a cordon by a play park at Queen Elizabeth Gardens in Salisbury, England, on July 5, 2018, after a man and woman were found unconscious after exposure with the nerve agent Novichok.
(Image: © CHRIS J RATCLIFFE/AFP/Getty Images)

Editor's Note: Dawn Sturgess died from the poison on Sunday (July 8) and her partner, Charlie Rowley remains in critical condition.

In March, ex-Russian spy Sergei Skripal and his daughter Yulia were found unconscious on a park bench in Salisbury, England, poisoned by a Soviet-era nerve agent.

On Saturday (June 30), another couple, who had visited Salisbury for a shopping trip the day before, fell ill at a house in Amesbury, about 10 miles (16 kilometers) away from where the first poisoning occurred. It was later found that they had been poisoned by the same nerve agent, called Novichok, according to the BBC.

Novichok, created in the 1970s and 1980s by the Soviet Union, binds to cholinesterase, an enzyme that is necessary for the nervous system to communicate with the muscles, Live Science previously reported. Subsequently, muscles begin to shut down, including those necessary for breathing.

The woman, 44-year-old Dawn Sturgess, was found foaming at the mouth, and the man, 45-year-old Charlie Rowley, was sweating, dribbling and making weird noises, according to the BBC.

The nerve agent acts the quickest when ingested or inhaled, and slower if a person's skin gets exposed. It doesn't evaporate or decompose quickly, which prompted expensive decontamination efforts following the Skripal poisoning, according to the BBC.

Police have said there was nothing to indicate that this couple was specifically targeted. Security Minister Ben Wallace said the victims were likely poisoned by contamination from the nerve agent left over from the previous attack, according to the BBC. But "that could change," he said.

A Russian scientist, Vil Mirzayanov, told the BBC that the nerve agent would have decomposed in the months after the first attack, as the nerve agent becomes unstable, especially in damp conditions.

Regardless of whether this was a targeted attack, the police have not yet found any items that were contaminated. However, they have sealed off the areas in Amesbury and Salisbury where the couple traveled Friday and Saturday.

Officials couldn't reassure the public that no one else is at risk, but England's chief medical officer, Sally Davies, said the risk is low, according to the BBC.