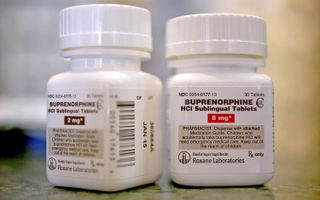 The opioid buprenorphine is prescribed to people to help treat their opioid addictions. But a new study shows that children, especially those under the age of 6, are accidentally being exposed to them.
(Image: © Joe Raedle/Getty, File)

The numbers are based on calls to poison control centers during that time period, according to the study, published today (June 25) in the journal Pediatrics.

Though it's used to treat opioid dependence, buprenorphine is also an opioid. However, it is much weaker than opioids that are typically abused, such as heroin and oxycodone, the study said. [America's Opioid-Use Epidemic: 5 Startling Facts]

The researchers don't know how or why so many children were exposed to buprenorphine, but they think it could have resulted from parents not storing the drugs properly — that is, out of children's reach. Indeed, around 90 percent of the exposures were unintentional, according to the study.

"We're not quite sure why [buprenorphine] stands out so much [to kids]," Henry Spiller, one of the authors of the paper and the director of the Central Ohio Poison Center, told CNN. "Perhaps the parents who have this may not think it's as risky as their other [opioids] because it doesn't have the big effect that the other[s] do for them."

But the drug is dangerous for young children. It "is never prescribed for children under 6," Spiller said. "It is a significant risk to them."

Almost half of the children under age 6 who were exposed to the drug were admitted to the hospital, and 21 percent of them had a serious medical problem, such as a seizure, cardiac arrest, respiratory depression (slow and ineffective breathing) or coma. Seven children under age 6 died as a result of the exposure.

The researchers wrote that manufacturers should use packaging that would make it more difficult for young children to access the pills. In addition, buprenorphine prescribers should talk to parents and child caregivers about the harms of exposure for young children and walk them through how to properly store and dispose of the drugs.