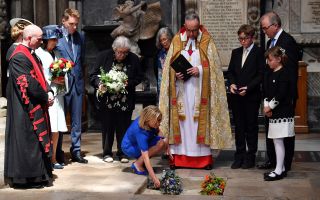 Stephen Hawking, the towering physics icon who died in March at age 76, was buried today (June 15) between Sir Isaac Newton and Charles Darwin.

Hawking's memorial service took place at Westminster Abbey in London, and his ashes were interred between the two British scientists. Atop his grave was a plaque inscribed with an equation that supported his most famous theory — of so-called Hawking radiation, which can leak out of a black hole until it evaporates away, the Daily Beast reported.

At the memorial service, his voice, set to a song by the composer Vangelis, was beamed into the nearest black hole.