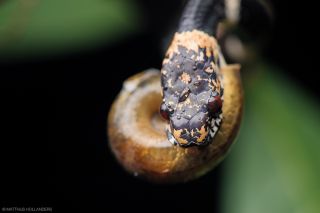 The snail-eating snake, Dipsas bobridgelyi, sucks a snail out of its shell.
(Image: © Matthijs Hollanders/ CC by 4.0 )

There's something strange about the five newly discovered snakes in Ecuador: Unlike most snakes that dine on rats, lizards and other small animals, these slithery reptiles eat snails.

And that's pretty much all these snakes can eat. There are now 75 known species of snail-eaters, according to a new study on the reptiles.

"The jaws of these snakes are modified so much that they cannot eat anything that isn't a snail or a slug," said lead study author Alejandro Arteaga, a doctoral student with the American Museum of National History in New York. "Sometimes, you can see [one] hanging from vegetation with a snail in its mouth," he said. [7 Shocking Snake Stories]

Indeed, snail-eating snakes have a jawline that has evolved to slurp the snail right out of its shell — but the snakes do this without suction (in other words, it's not the way we slurp oysters from a shell). To extract their escargot, the snakes push their lower jaws into the shell and grasp the flesh of the slimy critter with their curved teeth. Once the snakes have a firm grasp, they pull the prey out without crushing the shell — a process that usually takes a few minutes.

This snail-slurping "is an interesting adaptation," Arteaga told Live Science. Because not many snakes feed on these snails, the predators don't have much competition for food, he added.

But the snakes have other things to worry about. Arteaga and his team are proposing that three of the five species should be listed as "vulnerable" under the International Union for Conservation of Nature's Red List of Threatened Species and that one should be listed as endangered. "Four of them are facing the possibility of extinction. Only one is safe," Arteaga said.

The reason? A lack of cover for the snakes to hide in.

In western Ecuador, "only 2 percent of the original vegetation cover remains," Arteaga said. The rest of the forest cover and vegetation was destroyed by activities like logging and clearing land for cattle farming and human settlement.

Ultimately, there's "not really much forest left," Arteaga said, and that's not good for the snakes, who need forest cover, vegetation, moisture and nearby streams to survive. "They cannot survive in open cattle ranch [or] grassland."

Arteaga and his team recently held an auction for the "naming rights" to the snakes. With the money from that auction, the researchers will purchase a 178-acre (72 hectares) plot of currently unprotected land where some of these snakes live and thereby expand the Buenaventura Reserve in Ecuador.

The findings were published today (June 14) in the journal ZooKeys.