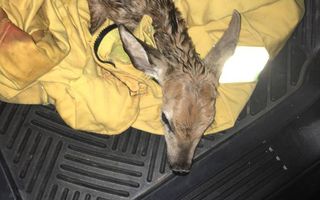 After a pregnant deer was killed by a car, her unborn fawn was delivered by emergency surgery.
(Image: © ODWC)

An Oklahoma wildlife official's quick thinking recently saved the life of an orphaned fawn: He performed emergency surgery to deliver the newborn deer after the deer's mother was struck and killed by a car.

The harrowing story was shared in a Facebook post yesterday (June 10) by the Oklahoma Game Wardens, part of the Oklahoma Department of Wildlife Conservation (ODWC). On June 9, game warden Ryan Walker responded to a call reporting a deer that had been killed by a vehicle on a state highway — with a young fawn seen nearby.

The mama deer had recently given birth, and when Walker arrived at the scene, both the doe and the fawn were already dead. But Walker spotted movement inside the mother — she had been carrying twins, and one was still inside her body. [Photos: See the World's Cutest Baby Wild Animals]

With no time to lose, Walker immediately performed a cesarean section at the side of the highway to deliver the fawn, and it was breathing on its own "within seconds," according to the Facebook post.

After the emergency C-section, the fawn was brought to a wildlife rehabilitator — a person licensed by the state of Oklahoma to care for wild animals that are injured or too young to survive on their own, according to the ODWC.

Game wardens deliberately keep the fences on these enclosures low. That way, a grown animal can easily jump over them when it's ready to return to the wild, Weaver explained.

"The first fawn I raised — about eight years ago — was here until she was about 1 year old. Then she just jumped the fence and left," Weaver said.

Thanks to Walker's efforts, the future looks bright for the rescued fawn. However, not every fawn found alone is orphaned. Often, deer mothers leave their babies to forage for food. In fact, these moms may be close by even if you don't see them, hiding until a perceived threat has moved on, according to the ODWC.

"As difficult as it can be, sometimes the best help we can offer young wildlife is to leave them alone and let nature run its course," Melynda Hickman, a biologist with the ODWC, said in a statement.