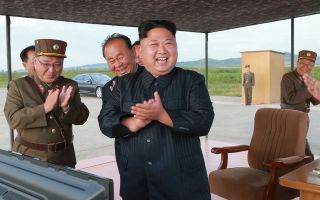 Some of us carry a security blanket to feel more comfortable when we are far away from home. North Korean leader Kim Jong Un reportedly carries a security toilet.

According to the South Korean newspaper Chosun Ilbo, Kim arrived in Singapore this morning (June 11) for a nuclear disarmament summit with U.S. President Donald Trump, and he brought his personal toilet with him. [North Korea: A Hermit Country From Above (Photos)]

Indeed, it is said that Kim never leaves home without a personal lavatory, and actually travels with several toilets every time he's on the road, the South Korean news site Daily NK previously reported. The leader's amenities include an emergency "chamber pot" in his Mercedes, that report said, as well as a designated toilet car in his motorcade. A separate mobile commode designed to handle "mountainous terrain and snow" may also join the leader's caravan as needed, according to an unnamed source privy to the leader's privy, Daily NK reported.

While anyone who has ever taken a road trip can understand the appeal of entirely avoiding public restrooms, Kim's mobile throne is also said to serve a national security purpose. Lee Yun-keol, a former member of a North Korean Guard Command unit, told The Washington Post that "the leader's excretions contain information about his health status so they can't be left behind." As Chosun Ilbo put it, the mobile lavatories "deny determined sewer divers insights into the supreme leader's stools."

How many secrets could Kim's stools actually hold? It turns out, a lot. [5 Things Your Poop Says About Your Health]

"The digestive tract contains more bacterial cells than there are cells in the entire body," Dr. Jean-Pierre Raufman, a gastroenterologist at the University of Maryland School of Medicine, previously told Live Science.

Not only is this dense bacterial biome like a fingerprint that contains the pooper's unique DNA, but it can also reveal whether that person's bowels are absorbing the nutrients they need and rejecting the germs they don't.

According to Raufman, the shade of Kim's stool could indicate, for example, whether the leader is bleeding internally or taking medication to treat an iron deficiency. Overly narrow stools could indicate a blockage in Kim's colon, which could be a sign of intestinal cancer. A poor diet or reliance on certain medications could result in constipation — which, if untreated, could lead to hemorrhoids or rectal bleeding. Persistent diarrhea, on the other hand, could be a sign of chronic disease such as irritable bowel syndrome or Crohn's disease.

Kim, who often relies on images of strength and power to bolster his leadership, would likely sooner keep his health status — and his poos — to himself (and his medical team). On this, at least, we can't say we blame him.