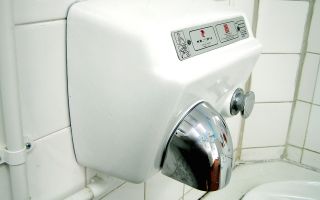 Bathroom air blowers seed the air — and you — with microbial hitchhikers.
(Image: © Shutterstock)

If you scrub your hands after using a public toilet and then use an air blower to dry them, you could be leaving the restroom with hands that aren't as clean as you'd think.

What's more, the rest of you could now be covered in assorted microbial hitchhikers, too.

Restroom hand dryers don't just blow — they also suck. When they hoover up air, they also siphon in bacteria, which includes microbes carried into the room on people's skin, and those left behind by waste after a person uses and flushes a lidless toilet. Then, after sucking these microbes up, the dryers spew them out again — in abundance, according to a recent study. [How Dirty Are Public Restrooms, Really?]

Researchers at the University of Connecticut School of Medicine put their own public restrooms to the test, and found that air-blowing hand dryers were creating invisible bacterial highways in bathroom air. And these redistributed bacteria weren't landing just on restroom occupants — thanks to high-energy blowers, the microbes were being dispersed throughout the building as well.

Previously, studies have shown that hand dryers can move bacteria from hands into the air, and have even suggested that they could contaminate newly washed hands with bacterial deposits, the study authors reported. To investigate that, they exposed 36 glucose-coated plates in public restrooms — first with the hand dryers off, and then with the hand dryers on — and then checked the plates for bacterial growth.

For tests conducted when the hand dryers weren't on, the researchers found little evidence of bacteria — an average of six colonies per plate. But when the blowers were up and running, so were the bacteria, with as many as 60 colonies, on average, growing on each plate. The researchers checked inside the dryers to see if internal microbial buildup could be playing a part. But though they found some bacteria when they swabbed inside the dryers, it wasn't nearly enough to account for the amount distributed by the dryers' airflow.

If the bacteria captured on the plates weren't originating in the blowers, they must have come from the bathroom air — possibly expelled into the air from the particles that sprayed out from toilets flushing, the study authors reported. Multiple bathroom samples included the microbe Bacillus subtilis, an occupant of the human gut. But B. subtilis wasn't alone; the plates exposed to hand dryers hosted "a variety of flora" — 62 types of diverse bacteria representing 21 species, including Staphylococcus aureus, a common bacterium that is part of the normal microbiome but which is also associated with serious infections, according to the study.

One of the steps that could help reduce bacterial circulation in bathrooms is fitting hand dryers with HEPA filters, the scientists discovered. When the researchers installed HEPA filters in bathroom hand dryers, it significantly reduced the number of bacteria that the blowers dispersed, they noted in the study. However, some bacteria were still distributed — including potential pathogens — suggesting that while filtration may reduce the risk of pathogen exposure, it would not eliminate it entirely, the researchers concluded.

The findings were published online in the April issue of the journal Applied and Environmental Microbiology.