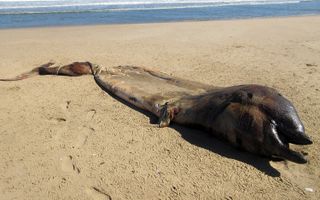 A bizarre-looking, nearly 20-foot-long (6 meters) sea creature washed ashore at Dorob National Park in Namibia last week. When scientists found the body, it was so decomposed that they didn't really know what they were looking at — it could've been a dolphin or a whale, or something else, according to the Daily Mail.

After measuring the carcass and analyzing the shape of its head, the scientists are now almost certain that the mysterious creature is a Cuvier's beaked whale (Ziphius cavirostris) — a creature that hasn't been sighted in Namibia since 2000, according to Simon Elwen, a principal investigator of the nonprofit Namibian Dolphin project and one of the researchers who found the creature, as reported by the Daily Mail.

"I was quite surprised," Elwen told the Daily Mail. "These animals are rarely seen in the water, so to see them on land is very unique." [Marine Marvels: Spectacular Photos of Sea Creatures]

Cuvier's beaked whales can be found across the world and tend live in temperate, subtropical and tropical waters. They can weigh up to 6,800 lbs. (3,090 kilograms) and can grow up to 23 feet (7 m) long, according to the National Oceanic and Atmospheric Administration (NOAA). They have a "goose-like" head with an upward-slanted jawline that makes them look as if they are smiling, according to NOAA.

On the IUCN Red List of Threatened Species, the Cuvier's beaked whale is listed as "least concern." Although global trends and population numbers for this elusive creature don't exist, there are at least 100,000 of them in the world, according to the IUCN. Possible threats to this species include entanglement in fishing gear, collisions with ships and human-caused noise, such as from ships.

The Cuvier's beaked whale is one of the deepest divers — plunging to a depth of about 3,300 feet (1,000 m). In addition, the species uses sound to find food, communicate with each other and navigate.

The team collected parts of the animal, including its skull, to investigate further, Elwen said.