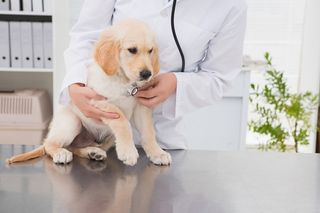 You've heard of the swine flu and the bird flu," but now scientists are concerned about dog flu — and, in particular, dog flu jumping to humans.

In a new study, researchers say they've found evidence that dogs could potentially be a source of new flu strains that could lead to a pandemic.

Specifically, the researchers found that flu viruses can jump from pigs to dogs and that, once in dogs, these "pig" flu viruses can mix with dog flu viruses — in turn, producing new flu viruses. That's worrisome, experts say, because pandemics can happen when flu viruses mix together in animal hosts and the viruses change in such a way that makes them able to infect people and spread easily. For example, scientists think the 2009 H1N1 (swine flu) pandemic happened when a bird flu virus jumped to pigs, exchanged some of its genes with pig flu viruses, and then jumped to humans. [11 Ways Your Beloved Pet May Make You Sick]

"The diversity [of flu] in dogs has increased so much now that the type of combinations of [flu] viruses that can be created in dogs represent potential risk for a virus to jump [from] a dog into a human," study co-author Adolfo García-Sastre, director of the Global Health and Emerging Pathogens Institute at the Icahn School of Medicine at Mount Sinai in New York, said in a statement. García-Sastre added that what they're seeing in dogs now "is very reminiscent of what happened in [pigs] ten years before the H1N1 pandemic."

Still, it's important to note that so far, there haven't been any cases of people catching the dog flu. And even if a dog flu virus were to jump to a human, it's unclear if the virus would be able to spread easily among humans in the population. "Further research is greatly needed to assess the pandemic risk presented by the expanding genetic diversity" of flu in dogs, the researchers wrote in the June issue of the journal mBio.

Dog flu, or canine influenza, is a respiratory illness caused by strains of the flu virus that infect dogs, according to the Centers for Disease Control and Prevention.

In the new study, the researchers sequenced the genomes of 16 influenza viruses obtained from dogs in southern China from 2013 to 2015.

The researchers found two types of H1N1 flu viruses that had recently jumped from pigs to dogs. They also found three new canine influenza viruses (CIVs) that were created after swine flu viruses mixed with dog flu viruses. The researchers called these viruses "CIV-H1N1r," "CIV-H3N2r" and "CIV-H1N2r," (with "r" standing for "reassortant").

The researchers noted that their findings are based on flu viruses collected from dogs that were taken to the vet after experiencing respiratory symptoms in Guangxi, China, and it's not clear whether these viruses are found in other areas of the world.

The new findings "emphasize "the need to conduct additional studies in other geographic areas to find how far the new canine influenza virus strains we have detected have spread, and whether a high frequency of influenza virus infection in dogs is also found in other areas," the researchers wrote.