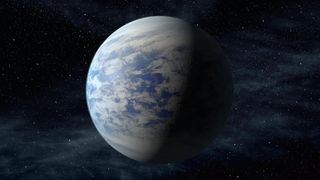 An artist's conception of Kepler-69c, a super-Earth located in the habitable zone of a star in the constellation Cygnus, 2,700 light-years from Earth. If intelligent aliens did exist on this planet, they'd have a tough time leaving its surface, due to the planet's super strong gravity.
(Image: © NASA/Ames/JPL-Caltech)

Woe be to alien civilizations on large planets.

On rocky worlds more massive than our own, gravity's powerful pull makes it nearly impossible for any life-forms that might exist there to launch satellites and explore the cosmos, previous research found. But one physicist has now come to extraterrestrials' rescue and figured out how they could develop a multi-part system called a space tether, which would slingshot spacecraft to the farthest reaches using a rotating orbital cable.

"My initial reaction when I first heard about [the space tether] was, 'There was no way that would work,'" said Alex Howe, an astrophysicist at the University of Michigan in Ann Arbor, and author of a new paper describing the idea. "Then I did the calculations, and I was surprised how much fuel and energy it would save." [13 Ways to Hunt Intelligent Aliens]

Rocky planets up to 10 times larger than our own are often called super-Earths. They are among the most common worlds circling other stars; astronomers have discovered nearly 1,000 of them to date. Because these planets' stronger gravity would hold a thicker protective atmosphere that could shield against cosmic radiation, some researchers have speculated that the conditions on such worlds might be even more conducive to the development of life than those on Earth.

But for technologically advanced aliens, super-Earths could be a bit of a trap, according to a previous paper on this subject. Escaping our planet's gravitational pull requires reaching a speed of around 25,000 mph (40,000 km/h) — quite fast, but achievable with chemical rocket fuels. But on Kepler-20b — a super-Earth that lies about 950 light-years from Earth and has roughly 10 times our planet's mass — escape velocity, or the speed needed to escape the planet's strong gravity, is a staggering 60,000 mph (96,000 km/h).

A rocket must also carry its own fuel on board, so every additional pound of propellant makes a rocket heavier, necessitating more fuel and thus making the vehicle even heavier — an effect known as the tyranny of the rocket equation, after the mathematical function that describes spaceflight. So, while the Apollo program's Saturn V rocket weighed only about 3,000 tons (2,700 metric tons), an equivalent rocket on a super-Earth would need to weigh 440,000 tons (399 metric tons), making it as heavy as Egypt's Great Pyramid of Giza. [The World's Most Beautiful Equations]

In the new paper, which was published May 16 in the preprint journal arXiv and has not been peer-reviewed, Howe outlined an alternative hybrid launch system: Instead of trying to fly all the way off-planet with just a rocket, aliens could first place an enormous cable in orbit around their world — a feat that would be achievable with traditional rockets like ours, said Howe.

This cable, sometimes called a skyhook, would be a few hundred miles in length and would slowly rotate around its center, the authors of the paper explained. One end of the cable would descend toward the ground as it spun, meaning that a rocket could be launched just a short way upward, perhaps 30 to 45 miles (50 to 70 kilometers) in height, and get hooked on to the cable's end. The rotating skyhook would then continue spinning, taking the rocket upward and propelling it with a slingshot-like boost to get farther out. Howe likened the effect to a lacrosse player using their extra-long stick to throw a ball with remarkable speed. [Interstellar Space Travel: 7 Futuristic Spacecraft to Explore the Cosmos]

While the concept of a skyhook itself has been around for a while, Howe said this is the first time that this propulsion method has been suggested for alien civilizations on super-Earths. Other proposed techniques, such as a 100,000-mile-high (160,000 km) space elevator, would require the development of exotic new materials whose strengths far exceed any currently known, said Howe. He added that never-built nuclear rockets, which would have engines much more powerful than the chemical rockets in use today, have also been posited as a means to get off super-Earths. But that technology essentially requires detonating a nuclear bomb beneath a spacecraft and then directing the blast in such a way as to direct the vehicle upward — a technique that could eject damaging radiation toward the ground and require extremely sturdy materials to hold a spacecraft together.

It's an interesting suggestion, said Avi Loeb, a theoretical physicist at the Harvard-Smithsonian Center for Astrophysics in Cambridge, Massachusetts, who was not involved with the new paper.

But Loeb wondered if the madcap skyhook scheme would really be worthwhile for aliens to pursue. Materials holding together the skyhook would have to be only a bit less exotic and strong than those holding up a space elevator, he said. So alien research-and-development teams on super-Earths might find it more fruitful to invest in searching for more powerful chemical reactions to use as rocket fuel or figuring out the means to make nuclear rockets safer.