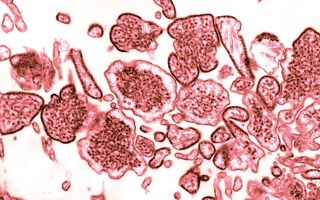 The Nipah virus in a sample of cerebrospinal fluid from an infected patient.
(Image: © BSIP/UIG/Getty)

At least 10 people in India have died from a rare virus known as Nipah virus, according to news reports.

The deaths occurred in Kerala, a state in southern India, according to the BBC. Two other people have tested positive for the virus and are critically ill, and an additional 40 people have been put into quarantine after having contact with those who died, the BBC reported.

Nipah virus infection is an emerging disease that was first identified in 1999 during an outbreak among pig farmers in Malaysia and Singapore, according to the Centers for Disease Control and Prevention (CDC).

The virus is thought to naturally infect fruit bats (of the genus Pteropus), but it can also infect pigs and other domesticated animals, as well as humans, according to the World Health Organization (WHO). The virus can also spread from person to person. [10 Deadly Diseases That Hopped Across Species]

Nipah virus can cause an inflammation of the brain known as encephalitis, according to the CDC. Symptoms can include fever and headache, followed by drowsiness, disorientation and confusion. People who are infected with the virus may fall into a coma within 48 hours of showing symptoms, the CDC says.

The virus can be highly lethal, with an average fatality rate of around 75 percent, according to the WHO.

Human infections with Nipah virus in India and Bangladesh have been linked with eating raw date palm sap contaminated by fruit bats, and contact with bats, the CDC said.

There's no drug to treat the illness and no vaccine to prevent it. "We are now concentrating on precautions to prevent the spread of the disease since the treatment is limited to supportive care," Rajeev Sadanandan, Kerala's health secretary, told the BBC today (May 21).

Editor's note: This article was updated on May 22 at 12:30 pm ET with new information on the number of deaths tied to the outbreak.