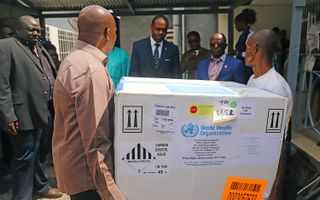 The Ebola outbreak in the Democratic Republic of Congo (DRC) is spreading, but this time around, there's a vaccine.

New cases of the notorious virus — which killed more than 11,000 people in the 2014 outbreak in West Africa — were first documented in early April in the DRC's rural Equateur Province, according to the World Health Organization (WHO). An outbreak was officially declared on May 8.

Yesterday (May 17), the first case was confirmed in Mbandaka, a city of 1.2 million people, the BBC reported.

But unlike during the 2014 outbreak, response teams are armed this time with a vaccine. So far, around 4,000 doses of the drug, called rVSV-ZEBOV, have been delivered to the capital, Kinshasa, according to Reuters. The same vaccine was used to contain a smaller outbreak in Guinea in 2016, and had promising results.

But even with the vaccine in hand, how quickly can health officials protect people? According to Martin Hibberd, a professor of emerging infectious disease at the London School of Hygiene and Tropical Medicine (LSHTM), the current outbreak will put the still-new vaccine to test.

"The vaccine appeared to work very well in the last outbreak" in Guinea, said Hibberd, whose team at LSHTM collaborated on the evaluation of the vaccination approach taken in that outbreak. As a result, "everyone is hoping that it will perform equally well in this [outbreak]." [10 Deadly Diseases That Hopped Across Species]

Still, "there are a number of challenges to using this type of vaccine, especially in this stage," he added.

The way the vaccine is being used is quite different from how standard vaccination programs work, Hibberd told Live Science. Instead of vaccinating a healthy population to protect people from a future encounter with a disease, in the case of Ebola, the response teams are vaccinating people who likely have already been exposed to the virus.

"That gives you a very small time window" after the vaccine is given for the body to generate enough antibodies to fight the virus, Hibberd said. Essentially, the body must produce these antibodies faster than the virus can replicate itself inside the body, he said.

And because response teams aren't giving the vaccine to everyone, but only to those who they think have been exposed, a lot of detective work is required to track down these individuals.

This so-called "ring prophylactic" vaccination approach requires tracking down every person who had contact with an infected individual and giving them the vaccine. Then, health officials also intend to locate and vaccinate each person who came into contact with people in the first "ring" of people. [The 9 Deadliest Viruses on Earth]

(Health care workers operating in the affected areas who are at high risk of contracting the disease will also be vaccinated.)

What's more, the ground teams operating in the area are facing significant challenges, according to WHO Director-General Dr. Tedros Adhanom Ghebreyesus. Most of the cases are in remote areas, some of which are accessible only by helicopter, Tedros said during a news conference today (May 18).

This might pose further problems for the vaccination program.The rVSV-ZEBOV vaccine needs to be stored at minus 112 degrees Fahrenheit (minus 80 degrees Celsius) — a significant challenge for mobile-response teams and field hospitals operating in tropical environments, Hibberd said.

"One of the issues is definitely electricity supply," said Hibberd, who expects his team to get involved in tackling the outbreak by helping to track contacts of those infected.

Hibberd praised the WHO's response to the current outbreak, saying he was optimistic the disease will be brought under control.

"I am really keen that we have learned from the last outbreak and are actually making an effort to contain it while it's small," he said.

Hibberd added that if the vaccine proves effective in the current outbreak, widespread vaccination programs might be considered to protect populations of those African countries at risk of Ebola.