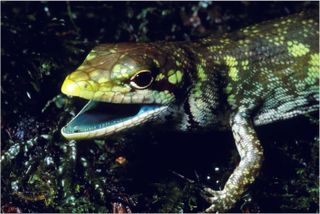 The green-blooded Prasinohaema prehensicauda has high concentrations of biliverdin, a toxic green bile pigment, in its blood.
(Image: © Chris Austin/LSU)

If you ever examine the innards of a green-blooded skink, you might take a second (or even a third) look: The muscles, bones and even the tongues of these lizards have a bright, lime-green color — not from their diet, but because of the copious amount of green bile that's in their blood.

But how did these lizards evolve to have all this green bile — which is usually toxic at high concentrations — in their systems? A new investigation, published online today (May 16) in the journal Science Advances, finds that skinks likely evolved to have green blood a total of four different times throughout history, suggesting that this trait is evolutionarily advantageous.

"We were excited by the complex history of these animals and surprised by the breadth of green-blooded lineages across lizards," study lead researcher Zachary Rodriguez, a doctoral candidate in the Department of Biological Sciences at Louisiana State University, said in a statement.

Their research focused on Prasinohaema, a genus of skink (a type of lizard) that is native to New Guinea. These skinks' green blood comes from high levels of biliverdin, a green bile pigment that, when converted to bilirubin, causes jaundice. The excess of green bile pigment essentially eclipses the normal ruddy hue of their red blood cells. However, even though animals in the Prasinohaema genus have levels of biliverdin that are 40 times greater than the lethal concentration in humans, the skinks are surprisingly healthy, the researchers said.

"In addition to having the highest concentration of biliverdin recorded for any animal, these lizards have somehow evolved a resistance to bile pigment toxicity," Rodriguez said. "Understanding the underlying physiological changes that have allowed these lizards to remain jaundice-free may translate to non-traditional approaches to specific health problems."

To understand the evolutionary history of the green-colored blood, Rodriguez and his colleagues did a genetic analysis of 51 species of skink, including six species that have green blood (two of which were previously unknown to science).

Their results indicate that Prasinohaema lineages evolved to have green blood four different times, all independently of one another. The fact that animals in this genus evolved so many times suggests that green blood may be advantageous, the researchers said. For instance, previous studies show that bile pigment can act as an antioxidant that destroys free radicals — atoms that are associated with disease. But it's still unclear what role biliverdin plays in the skinks, the researchers noted.

That mystery may soon be solved. Chris Austin, a biologist at Louisiana State University, and colleagues, plan to study the potential effects of green blood pigment on malaria and other parasites that infect these skinks, study co-researcher Susan Perkins, curator and professor at the Sackler Institute for Comparative Genomics and the Division of Invertebrate Zoology at the American Museum of Natural History, said in the statement.