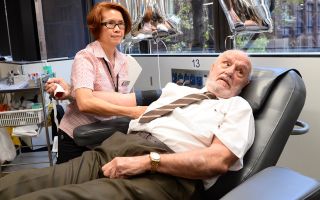 James Harrison giving his final blood donation on May 11, 2018. It's estimated that his 1,173 donations helped save the lives of more than 2 million babies.
(Image: © Subel Bhandari/DPA/Zuma)

A man in Australia helped save the lives of more than 2 million babies by donating his "special" blood, which was used to make a medication that can prevent life-threatening problems in newborns. But why exactly is this man's blood special, and how does the medication work to save babies?

The 81-year-old man, James Harrison, donated blood for 60 years and made his final donation on Friday, May 11, according to the Australian Red Cross Blood Service. Sometimes called "the man with the golden arm," Harrison donated blood more than 1,100 times, and it's estimated that his donations helped save the lives of 2.4 million babies in total, the Australian Red Cross said.

Harrison's blood contains a rare antibody that's used to make a medication called anti-D immunoglobulin, also known as Rh immunoglobulin. This medication is given to mothers who are at risk for something called "Rh incompatibility" with their fetus, which means the mothers' immune system may attack and destroy the fetus's red blood cells.

When this happens, "you end up with a situation where a lot of these babies would have a significant amount of their red cells broken down while they were in the womb," said Dr. Saima Aftab, medical director of the Fetal Care Center at Nicklaus Children's Hospital in Miami. This can lead to serious complications for the newborn, including brain damage, jaundice or even stillbirth, Aftab said.

However, treatment with Rh immunoglobulin, which is made from the blood plasma of "special" blood donors like Harrison, can prevent these complications.

"The discovery of this antibody is one of the biggest life-saving discoveries of the last century," Aftab told Live Science. [7 Baby Myths Debunked]

You've probably heard that your blood type is "positive" or "negative." This refers to a protein called the "Rh factor" on the surface of red blood cells. When people have this protein, they are said to be "Rh positive," whereas if they lack the protein, they are "Rh negative."

For most people, whether they are Rh positive or Rh negative won't make a huge difference in their lives, Aftab said. But for pregnant women, there can be problems when the mother is Rh negative but the fetus is Rh positive.

That's because if the baby's Rh-positive blood cells leak into the mother's bloodstream, the mother's immune system sees the Rh-positive blood cells as "foreign" and makes antibodies again them, Aftab said. These antibodies can then cross the placenta and break down the fetus's red blood cells. In the developing world, such Rh incompatibility is one of the leading causes of illness and mortality in newborns, Aftab said.

To prevent problems from Rh incompatibility, doctors first test a woman's blood early in pregnancy or before pregnancy. If she is Rh negative, she'll likely be given Rh immunoglobulin. In the United States, about 15 percent of the population is Rh negative, according to Medscape.

The American College of Obstetricians and Gynecologists (ACOG) recommends that Rh-negative women receive this medication when they are 28 weeks pregnant and also within 72 hours after giving birth to an Rh-positive baby. A dose of Rh immunoglobulin may also be needed after invasive procedures, such as amniocentesis, or after a first-trimester miscarriage or abortion, ACOG says. In Australia, about 17 percent of pregnant women receive the treatment, including Harrison's own daughter, the Sydney Morning Herald reported.

Exactly how Rh immunoglobulin works to prevent complications from Rh incompatibility is not clear. But researchers think that the antibody covers the surface of the fetus's Rh-positive blood cells in the mother's bloodstream and prevents the mother's immune system from seeing them, Aftab said.

It's not common for people to have the type of antibody in their blood that's used to make Rh immunoglobulin. Indeed, in Australia, the country's Rh immunoglobulin is made from a pool of only about 200 blood donors, according to the Australian Red Cross.

Harrison likely developed the antibody when he was given a large blood transfusion at age 14. Following that transfusion, "his immune system revved up a high concentration of antibodies" against Rh-positive blood cells, said Aftab, who has not treated Harrison. This would mean that Harrison himself is Rh negative.

Harrison needed to stop donating blood because he is past the age limit for blood donors in Australia, and the Australian Red Cross said he should stop donating to protect his health, according to the Sydney Morning Herald.