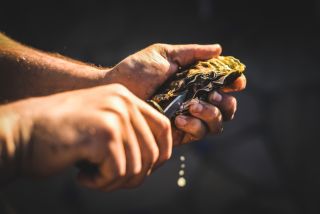 Shucking oysters can be tricky, but no one expects to get sick from doing it. But that's what happened to a North Carolina man who developed a rare bacterial infection after prying open one of the mollusks, according to a report of the man's case.

The culprit was Mycobacterium szulgai, a bacterium found in soil and water. People typically don't become sick when exposed to this organism, but when they do, the bacteria usually infect the lungs and, in some cases, can cause infections in the skin, bones and sheaths surrounding tendons.

The bacteria can get into a person's body through cuts in the skin, which is precisely what happened to the 66-year-old man, who was shucking oysters with a cut on his hand, said case report lead author Dr. Amir Barzin, an assistant professor of family medicine at the University of North Carolina School of Medicine who treated the man. [27 Oddest Medical Cases]

The bacteria were likely on the shellfish and probably entered the man's skin through his cut, Barzin told Live Science. Other animals that are known to carry the bacteria include certain fish, other shellfish and turtles, according to the case report, which was published online last December in the journal BMJ Case Reports.

But infections with M. szulgai are rare, so when the man first went to the doctor because of mild swelling in his right index finger, doctors didn't suspect the bacteria were the cause. Indeed, he could move the finger without experiencing any pain, and X-rays of his hand didn't show anything unusual.

But when the swelling in the man's finger did not go away, he was sent to an orthopedic specialist because his medical history made him more vulnerable to infections. In particular, the man had received a kidney transplant years earlier and was taking medications to suppress his immune system and prevent rejection of the donor kidney, according to the case report.

The orthopedist suspected the man had "stenosing tenosynovitis," or inflammation within the protective sheath surrounding the tendon in his index finger. (Tendons connect muscle to bone.) He was given a shot of steroid medication to relieve the swelling, but his symptoms returned a few months later.

At that point, the man was sent for an MRI, which suggested he might have an infection in the tendons of his finger. He also needed a surgical procedure known as a "flexor tenolysis," which is done to release any areas along a tendon that are stuck, or "adhesed," Barzin said. This was necessary because the man was unable to bend his finger normally, Barzin said.

During the procedure, surgeons collected a sample of the infected tissue and sent it to a lab for analysis. That's when doctors discovered that the cause of his infection was the bacterium M. szulgai. It was only after the bacterium was identified that the man recalled getting a cut on his hand while shucking oysters, because his finger became swollen.

Barzin noted that it's unlikely that people with healthy immune systems would get sick from these bacteria. But the immune-suppressing medications that the man was taking gave the rare infection a chance to flourish, he added.

Had the man delayed seeking medical attention, he might have developed lasting damage to his finger, Barzin said, and there would have been a small chance for the infection to spread to other tendons.

The man took antibiotics for about four months to clear the infection. When doctors last saw him, the range of motion in his right finger was almost back to normal, Barzin said.