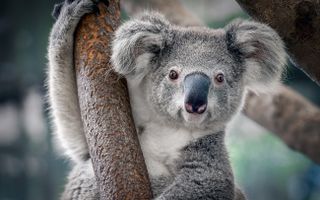 Chlamydia in koalas is no laughing matter.
(Image: © Shutterstock)

One of the leading killers of Australia's endearing koalas is a debilitating bacterial infection: chlamydia.

The idea of koalas with chlamydia — a common sexually transmitted infection in people — recently drew chuckles on HBO's "Last Week Tonight," but the disease, which is affecting koalas in epidemic proportions, is hardly a laughing matter.

Chlamydia-infected koalas made the news on Sunday (May 6) when the show's host, John Oliver, mentioned the dedication of a new koala ward at the Australia Zoo Wildlife Hospital, called the John Oliver Koala Chlamydia Ward, to treat the sick marsupials.

But chlamydia is no joke to koalas. Surveys have shown that some wild populations demonstrate a 100 percent rate of infection, which frequently leads to blindness, severe bladder inflammation, infertility and death. And treatment with antibiotics could create further problems for the marsupials, upsetting their gut microbes and making it difficult for them to digest the eucalyptus leaves that are a staple of their diet, researchers recently discovered. [Marsupial Gallery: A Pouchful of Cute]

Though chlamydia has sickened koalas for decades, it has long been unclear why they are so vulnerable to the infection. But scientists now suspect that a virus in the same family as the human immunodeficiency virus (HIV) could be the culprit, according to a study published online in the March issue of the Journal of Virology.

Researchers learned that koalas infected with this virus, called koala retrovirus type B, were more likely to be infected with chlamydia, and were also more likely to develop severe symptoms, such as infections in their urinary and reproductive tracts, conjunctivitis and cancers.

Adult koalas catch chlamydia just as people do — through sexual transmission — but young koalas can also become infected by eating pap, a nutritious type of feces, when it is excreted by infected mothers, according to a study published March 12 in the journal Peer J.

Diseased koalas are treated with antibiotics, but the koalas often lose weight and die even after receiving treatment, scientists discovered. In the Peer J study, the researchers questioned whether the drugs meant to save the koalas might be upsetting the balance of their gut diversity and interfering with their ability to digest their food. Eucalyptus leaves, which provide much of adult koalas' nutrition in the wild, contain a compound called tannin that can be highly toxic if it isn't broken down by certain types of gut bacteria, and if those microbes are absent, koalas might be unable to process their eucalyptus meals, the scientists wrote.

They also found that there was "a strong correlation" between the composition of a koala's gut flora and its prognosis for survival after treatment with antibiotics. This was especially true for the microbe Lonepinella koalarum, which is known for its ability to break down tannin, according to the study.

Over the past two decades, koala populations in parts of Australia have declined by as much as 80 percent, researchers reported in February 2017 in the journal Scientific Reports. Surveys of records from treatment facilities found that chlamydia was the most lethal of all diseases affecting the animals, second only to injury from cars as the most frequent cause of koala death. While the new John Oliver Koala Chlamydia Ward will no doubt help some infected koalas, there is clearly much more work required to preserve a future for these iconic animals.