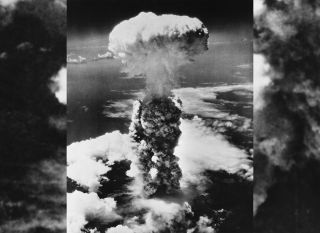 On Aug. 6, 1945, the United States dropped an atomic bomb nicknamed "Little Boy" on Hiroshima, Japan, leading to a nuclear blast that instantly claimed about 45,000 lives. Now, the jawbone of one of those casualties — belonging to a person who was less than a mile from the bomb's hypocenter — is helping researchers determine how much radiation was absorbed by the bones of the victims, a new study finds.

The amount is staggering: Analyses show that the jawbone's radiation dose was about 9.46 grays (Gy). A Gy is the absorption of one joule of radiation energy per kilogram of matter, which in this case is bone. [5 Everyday Things That Are Radioactive]

"About half that dose, or 5 Gy, is fatal if the entire body is exposed to it," study co-researcher Oswaldo Baffa, a professor at the University of São Paulo's Ribeirão Preto School of Philosophy, Science & Letters, said in a statement.

Previous studies have measured other aspects of the bomb's catastrophic effects, including the radiation dose victims were exposed to from nuclear fallout (which is radioactive dust) and how the fallout affected human DNA and health, the researchers said.

"Currently, there's renewed interest in this kind of methodology due to the risk of terrorist attacks in countries like the United States," Baffa said. Techniques such as this one "can help identify who has been exposed to radioactive fallout and needs treatment" in the event of a nuclear attack, he added.

The new finding is decades in the making. In the 1970s, study senior researcher Sérgio Mascarenhas, who was then a physicist at the University of São Paulo's São Carlos Physics Institute, discovered that X-ray and gamma-ray irradiation made human bones slightly magnetic, according to the statement.

This phenomenon — called paramagnetism — happens because the bone contains a mineral called hydroxyapatite. When bone is irradiated, it produces CO2- that shows up in the hydroxyapatite. The resulting free radicals can then be used as a marker for radiation dose in bone.

At first, Mascarenhas thought he would use this technique to date ancient bones for archaeologists. His research was so widely lauded that Harvard University invited him to teach. On one trip from Brazil in 1972, Mascarenhas stopped in Japan so he could test the method on the remains of people from the Hiroshima blast.

"They gave me a jawbone, and I decided to measure the radiation right there, at Hiroshima University," Mascarenhas said in the statement. "I needed to prove experimentally that my discovery was genuine."

His analysis was rudimentary; the lack of advanced computers meant that the estimate couldn't separate the atomic-bomb-induced signal from the background signal. Even so,he presented the results at the American Physical Society's annual March Meeting in Washington, D.C., in 1973.

Mascarenhas was allowed to keep the jawbone and brought it back with him to Brazil.

Thanks to new advances in technology, researchers are now able to separate the background signal from the radiation dose from the nuclear attack. [Doomsday: 9 Real Ways Earth Could End]

"The background signal is a broad line that may be produced by various different things and lacks a specific signature," Baffa said. "The dosimetric signal is spectral. Each free radical resonates at a certain point on the spectrum when exposed to a magnetic field."

When the U.S. dropped the atomic bomb, the weapon exploded about 1,900 feet (580 meters) above Hiroshima, Live Science previously reported. The person whose jaw the researchers examined was about 0.9 miles (1.5 kilometers) from the bomb's hypocenter, or the spot below the bomb's blast.

To study the bone, the researchers removed a small piece that was used in the previous study and then irradiated that piece in the lab, a process known as the additive dose method.

"We added radiation to the material and measured the rise in the dosimetric signal," Baffa said. By extrapolating from this signal, the researchers were able measure other samples, including different parts of the jawbone.

This technique allowed them to determine the radiation dose the bone received, which was similar to the dose distribution found in different materials around Hiroshima, including wall bricks and roof tiles, the researchers said.

"The measurement we obtained in this latest study is more reliable and up to date than the preliminary finding, but I'm currently evaluating a methodology that's about a thousand times more sensitive than" ESR, Mascarenhas said. "We'll have news in a few months."

The study was published online Feb. 6 in the journal PLOS ONE.

Editor's Note: This story was updated to correct the process that produces CO2- in irradiated bone. CO2- is not produced when CO2 loses electrons.