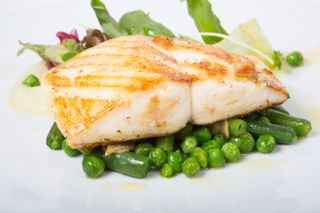 Eating peas, green beans and salmon is linked with a delayed onset of menopause.
(Image: © Shutterstock)

Eating certain foods may be linked to a delayed or hastened onset of menopause, a new study from England finds.

Chowing down on fresh legumes, such as peas and green beans; and oily fish, such as salmon, sardines and mackerel; may be linked to a delay in the onset of menopause, while eating refined carbs, such as rice and pasta, may be linked to an earlier onset, the researchers found.

However, the study found only a correlation between diet and the timing of menopause; the study didn't look at what mechanisms, exactly, would enable a woman's diet to influence menopause. In other words, the study didn't prove cause and effect. [5 Key Nutrients Women Need As They Age]

What's more, it's not yet clear whether delaying menopause is a good thing. Early menopause is linked to an increased risk of heart disease, osteoporosis and depression, but it also protects against certain cancers, including breast, endometrial and ovarian cancers, the researchers said.

"As such, we cannot really recommend women to consume these specific foods to influence their onset of natural menopause," said lead study researcher Yashvee Dunneram, a doctoral student in the School of Food Science and Nutrition at the University of Leeds in England.

Previous studies have shown that diet may influence menopause, but results from different studies had contradictory findings, Dunneram told Live Science. So, she decided to use survey data from the U.K. Women's Cohort Study, which allowed her and her colleagues to examine the eating habits of women before they reached menopause and then compare that information with the women's actual age of menopause. This ongoing survey made the data more reliable than a retrospective study, in which people try to remember what they ate years afterward, she said.

To investigate, the researchers looked at survey data collected from more than 35,000 women, ages 35 to 69, from England, Scotland and Wales. On the survey, the women answered questions about health factors that might influence menopause, including diet, weight history, exercise levels, reproductive history and the use of hormone replacement therapy.

Then, four years later, the researchers followed up with the women and asked at what age the women had reached menopause. About 14,000 women responded at both time points, and of those, 914 reported that they had gone through natural menopause during that four year period, when they were between ages 40 and 65.

On average, the women reached menopause at age 51, the researchers found.

In contrast, each additional daily portion of refined carbs was associated with a 1.5-year-earlier menopause start date — a finding that took into account other possible influential factors, the researchers said.

The researchers also broke down the data into smaller groups, looking at mothers versus nonmothers and vegetarians versus nonvegetarians.

Perhaps certain foods, such as grapes, legumes and oily fish, are associated with later menopause because they contain or stimulate antioxidants, which may play a role in egg maturation and release, the researchers said.

Conversely, refined carbs increase the risk of insulin resistance, which can interfere with sex hormone activity and boost estrogen levels — factors that may increase the number of menstrual cycles and deplete egg supply faster, the researchers said. [5 Myths About Women's Bodies]

The study was published online today (April 30) in the Journal of Epidemiology and Community Health.