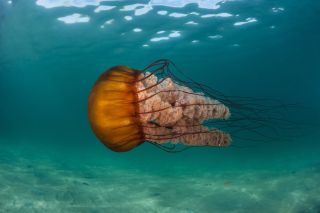 The deep ocean is eerily dark, but not silent. Take a listen.

An underwater microphone is now live-broadcasting what the depths of the ocean sound like — and you can tune in whenever you feel like taking a dip, er, dive (in the arms of a submersible).

Installed 3,000 feet (900 meters) below the surface of the ocean in Monterey Bay, California, the underwater microphone, also called a hydrophone, is just a 2-inch-wide (5 centimeters) metal cylinder standing on three legs, according to a 2016 statement from the Monterey Bay Aquarium Research Institute (MBARI). And it can hear like a beluga whale (picking up way higher frequencies than humans can).

Most adult humans can hear frequencies of between 20 and 16,000 hertz, whereas the hydrophone can pick up low rumbles of 10 hertz and very high pitches of up to 128,000 hertz, according to MBARI. However, the livestream isn't broadcasting sounds that are too high-pitched for humans to hear, according to a new MBARI statement. Many of the noises, like the squeaky calls of dolphins, are audible using just classic headphones. But the instrument is broadcasting lower-pitched ones, like the rumbles of whales, that can be heard only with subwoofers or really good headphones. [Ocean Sounds: The 8 Weirdest Noises of the Antarctic]

The hydrophone feeds the sounds of the ocean through miles of underwater cable, where they get processed and archived before arriving in the livestream, amplified but with a 30-minute delay.

Sound can travel far and wide in the water (and much faster than in the air). Some sounds picked up by the microphone come from whales that are hundreds of miles away. Most of the sounds the hydrophone records emanate from high up in the water or on its surface — such as the calls of sea lions, the wind and the pitter-patter of rain. But high-pitched sounds like dolphin clicks can't travel as far. If you tune in and hear these clicks, the dolphin is probably swimming within a couple of miles of the microphone, according to the statement.

Of course, what humans hear is very different from what various underwater species of fish and animals hear. And noise pollution picked up by the microphones — such as the roar of ship engines —  probably drowns out some of those natural sounds.

"It can be quiet at times, and then go from quiet to cacophony in minutes. So, if people don't hear much at one point in time, they should definitely check in again later," lead project scientist John Ryan, a senior research specialist at MBARI, said in the statement.

It could just be the quiet before the storm.