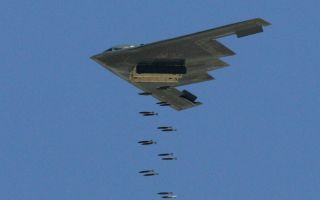 The frigid Canadian arctic is a rough place to try and catch a spy.

For one, the region is smack dab on top of the world's magnetic North Pole, where the violently charged particles released by sunspots and solar flares are inevitably drawn. This solar interference makes it hard enough to separate important radio signals from background noise — and when you're trying to detect a stealth missile specifically designed to repel radio waves, your job gets even harder.

That's why Canadian scientists want to up their country's spy-spotting game in the arctic by replacing their traditional radar stations with powerful "quantum radars," powered by one of the enduring puzzles of quantum physics. [Supersonic! The 11 Fastest Military Planes]

The phenomenon known as "quantum entanglement," which involves creating pairs or groups of particles whose fates are forever tied, might hold to key to seeing through stealth aircraft's radio-repelling shields.

But a functional quantum radar has never been tested outside of the lab. This week, researchers at the University of Waterloo in Ontario, Canada announced that they're taking a big step forward in doing just that.

“The goal for our project is to create a robust source of entangled photons that can be generated at the press of a button,” Jonathan Baugh, a faculty member at the University of Waterloo's Institute for Quantum Computing (IQC), said in a statement. “This project will allow us to develop the technology to help move quantum radar from the lab to the field. It could change the way we think about national security.”

But what do photons, or light particles, have to do with detecting stealth aircraft and missiles? It all hinges on the mysterious behavior of entangled particles, which have puzzled physicists since Einstein's time.

In quantum physics, "entangled" particles are two particles (like photons) that have a special connection. When a force or action changes one particle, the paired particle instantaneously changes too, even if the two particles are separated by huge distances — say, 100,000 light-years apart.

In a quantum radar, entangled photon pairs would be linked with each other on a scale of miles rather than light-years (at first, at least). First, clusters of individual photons must be split by a crystal, each severed photon becoming an entangled pair. One photon in a pair would be contained at the radar station, while the second would be transmitted into the sky. When that second photon strikes something in the sky — say, a stealth bomber — it would bounce off and be deflected, and its return time would reveal the bomber's position and speed.

Stealth planes try to hide from radio waves, so light-based methods would be much more effective against them. And any attempt to scramble or alter the photon that hits the bomber would instantly be reflected in the state of the stationary photon, because the two are entangled. The entanglement between the photon pair also allows the quantum radar to separate the signal of the entangled photon bouncing off a plane from the noise of other light particles cruising through the atmosphere, such as those from solar flares.

In this way, a quantum radar could essentially see past stealth objects designed to repel traditional radio-based radar systems.

Quantum radar technology still remains largely theoretical, despite a state-run Chinese newspaper's claim that the country had already achieved functioning quantum radar in 2016 (some experts are skeptical of this claim). But researchers around the world, including teams at Lockheed Martin and The University of Waterloo, continue pressing forward into the invisible.