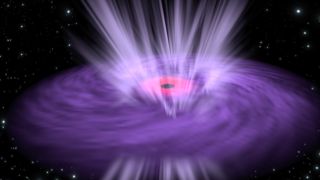 COLUMBUS, Ohio — White-hot winds blow through space, carrying vast pillars of matter away from the event horizons of black holes. And now scientists know that these strange gusts appear and disappear in less time than it takes you to flip on a fan.

Scientists have known since at least 2011 that these winds are powerful forces in the atmuniverse, bouncing away as much as 95 percent of the particles that black holes suck toward themselves. And now, scientists have studied the winds' X-ray shadows in more detail than ever before, said Joey Neilsen, a physicist at Villanova University in Pennsylvania. Right in front of a telescope's X-ray eyes, winds that had been blowing for months all of a suddent seemed to disappear in a matter of seconds.

Neilsen presented the finding, which has not yet been published, Sunday (April 15) at the April meeting of the American Physical Society. He and his colleagues used the Neutron Star Interior Composition Explorer (NICER), a new X-ray telescope NASA mounted on the International Space Station, to peer into these million-degree winds and learn how they behave. [Stephen Hawking's Most Far-Out Ideas About Black Holes]

"It's like a mist passing in front of a street lamp at night," Neilsen told Live Science after his presentation, "or a neon light put in front of an even brighter surface of the same color — on its own, it would look bright, [but against the shining background of a black hole,] it looks dark."

It might be weird to think of a black hole as a bright background, but it's not the hole itself that glows with X-rays. It's the surrounding material.

As matter gets pulled toward a black hole, it forms a whirling cloud of dust, called an accretion disk, which is many times larger than the black hole itself. As the dust approaches the black hole, the material accelerates to incredible speeds and glows by giving off brilliant X-ray beams. Telescopes like NICER can study these emissions. Near the event horizon of the black hole — the point beyond which matter and light get (more or less) lost in the sucking gravity pit — those X-rays become so powerful that they push most of the falling matter out and away, back into space at incredible speeds, Neilsen said.

That expelled, hot matter skims along the accretion disk, forming the wind that Neilsen and his colleagues study.

To astrophysicists, this wind appears as strange dips on graphs of black holes' X-ray light. Looking through NICER, Neilsen and his colleagues examined GRS 1915+105, a famous (in astrophysics terms, at least) black hole that has wildly varying X-ray emissions. The researchers showed that when the black hole's X-ray emissions dimmed, the winds let up as well.

"It really happens in seconds, just like that," Neilsen said, lowering his hands to indicate a sudden drop.

The moment the accretion disk around GRS 1915+105 stops shining brightly, the wind flowing away from the black hole dies down as well. And this can happen incredibly fast, even after months of relatively consistent blowing, the researchers showed.

This wind isn't quite like the wind we're used to here on Earth, Neilsen said. Its gas is incredibly thin, he said, much thinner than Earth's atmosphere, while simultaneously so much hotter that its raw, diffuse iron particles can shine enough X-ray light out into the universe that it would kill a person up close.

Down the road, Neilsen said, he hopes that he and his colleagues can use NICER's detailed measurements of these winds over very short time spans to probe the behavior of the winds as they crash against the event horizons of black holes. In doing so, the scientists could answer some deep questions about gravity and how matter behaves in those strange places, he said.