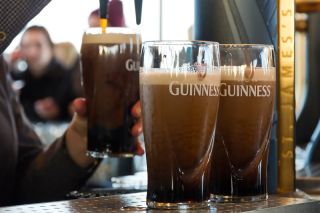 Guinness being served at The Guinness Brewery in Dublin, Ireland.
(Image: © VanderWolf Images/Shutterstock)

Beer connoisseurs would certainly give you an odd look if you imbibed your Guinness from a martini glass.

But one mathematician says this actually might be the best glass to serve Guinness in because it allows the beer's bubbles to settle faster.

William Lee, a professor of mathematics at the University of Huddersfield in England, has studied the unique flow of bubbles in the creamy stout, and recently weighed in on which type of glassware would hypothetically be best to serve the famous Irish beer in.

"People think that the Guinness glass is designed to optimize the settling time," Lee said in a statement. "But now we have a better understanding of the theory behind it, we might be able to make an even better glass so that it settles faster. Unfortunately, the ideal shape would look like a giant cocktail glass!"

In 2012, Lee and colleagues used computer simulations to explain exactly why the bubbles in Guinness and other stouts appear to sink downward while the beer is settling — seemingly defying the laws of physics. (After all, since the bubbles are less dense than the liquid, shouldn't they always rise?)

At that time, the researchers determined that the bubbles were indeed obeying the laws of physics — they were sinking because of a "circulatory flow," or the current in the glass. That is, the bubbles were still rising relative to the liquid, but sinking relative to the glass due to the circulating flow, which is directed downward at the sides of the glass, and upward in the middle, according to Lee. But what caused this circulating flow? [7 Ways Alcohol Affects Your Health]

The cocktail glass, with its steeply slanted sides, would allow the bubbles to flow more quickly to the bottom and then rise to the top, according to the Daily Mail.

Lee's 2012 paper used computer simulations to show why bubbles flow downward; and now, Lee has confirmed these findings using a mathematical model, which increases the researcher's confidence in the results. A paper describing the model was published in the March issue of the American Journal of Physics.