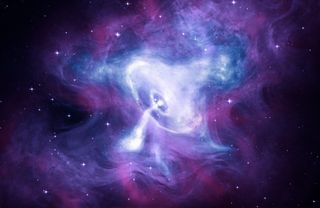 Phosphorus is an essential element for life — but that there was enough of it for life to start on Earth might just have been a matter of luck, new findings suggest.

According to new observations of the Crab Nebula — the leftovers from an exploding star first seen by Chinese astronomers in 1054 — presented on April 5 at the European Week of Astronomy and Space Science in Liverpool, England, the abundance and distribution of phosphorus in the Milky Way galaxy may be more random than scientists previously thought. As such, some places in the galaxy may not have enough phosphorus to support life, even if they are home to otherwise hospitable exoplanets, the researchers said. [Extreme Life on Earth: 8 Bizarre Creatures]

Most of the universe's phosphorus was created during the last gasps of dying massive stars or during a supernova — when such a star exhausts its fuel and explodes. Phosphorus is difficult to observe, and only in 2013 did astronomers make the first measurements of the element in a stellar explosion, in the wispy remains of a supernova called Cassiopeia A. Surprisingly, they found up to 100 times more phosphorus than what's observed in the rest of the Milky Way.

But that might have been an outlier. Recently, astronomers Jane Greaves and Phil Cigan of Cardiff University in the U.K. pointed the William Herschel Telescope in the Canary Islands toward the Crab Nebula, located about 6,500 light-years away. Preliminary data, analyzed just two weeks ago, shows an amount of phosphorus more similar to the values found in the interstellar gas and dust of the Milky Way — a pittance compared with the abundance in Cassiopeia A. (The findings have not yet been submitted to a peer-reviewed journal.)

"It's not a guaranteed thing to have phosphorus abundant everywhere, ripe for the picking," Cigan told Live Science. "It seems to look like luck plays a bigger role in this."

Some of that luck may come down to size. The star that created Cassiopeia A is roughly twice as massive as the one that made the Crab Nebula. A more massive star could have generated different reactions that produce more phosphorus, the researchers said.

If the production of phosphorus varies widely across the galaxy, so might the likelihood of life on other planets. Even if a planet had every other condition required for habitability, it might still be bereft of life because it formed where there was a dearth of phosphorus, the researchers said.

But the observations are still preliminary; the astronomers were only able to measure parts of the nebula before clouds and a snowstorm spoiled the rest of their observing run. Still, Cigan said, the data they do have show significantly less phosphorus in the Crab Nebula than in Cassiopeia A.

The researchers have applied to use the Herschel Telescope to study the rest of the nebula. Future analysis will also include comparisons with computer models, Cigan said.

Ultimately, astronomers will need to measure phosphorus in other supernova remnants across the cosmos, Cigan said. "We really want to look at how it's spreading out from supernova remnants and falling back into the interstellar medium — that's the key."