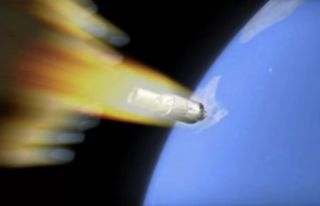 An artist's illustration of China's first space station, Tiangong-1, falling to Earth as it burns up in the atmosphere.
(Image: © China Manned Space Engineering Office)

Editor's note: Chinese space station Tiangong-1 fell to Earth in the southern Pacific Ocean on Sunday, April 1 at 8:16 p.m. EDT (0016 GMT on April 2). You can read more about the fiery reentry here.

It sure looks like the abandoned Chinese space station Tiangong-1 will put on its re-entry light show tonight.

The European Space Agency (ESA), which has been tracking the prototype habitat through its final days and hours, now predicts (as of April 1) it will re-enter the atmosphere sometime tonight (April 1) through early Monday morning (April 2) in UTC time, which is 4 hours ahead of Eastern Daylight Time. The Aerospace Corporation, which has also been tracking the falling station, more or less concurs, writing that Tiangong-1's crash is likely to occur at 8:30 p.m. EDT tonight (0030 GMT Monday, April 2), give or take 1.7 hours. Even so, anything is possible as the lab makes its final and uncontrolled descent.

It remains true that no one knows where the 9.4-ton (8.5 metric tons) station will come down, other than somewhere between 43 degrees latitude north and 43 degrees latitude south (an area that includes most of the inhabited regions of the planet). [In Photos: A Look at China's Space Station That's Crashing to Earth]

It also remains true that it is not a danger to you or anyone else, because the Earth is very big and still mostly pretty empty, and the station is very small in the scheme of things. And the odds of getting hit by a piece of the space lab that manages to survive the fiery re-entry into our atmosphere are incredibly low.

Worth noting: China has still not officially confirmed that it's not in control of the falling station, but China did lose contact with the uncrewed object on March 21, 2016, and likely has not re-established contact since.

In any event, there's a non-zero chance that you'll witness something extraordinary if you look up into the sky this weekend.

Editor's Note: This article was updated on April 1 with information about Tiangong-1's crash to Earth.