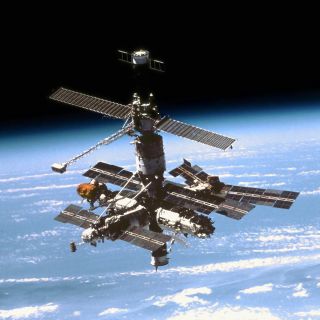 China's abandoned space station Tiangong-1 is out of control, and it's going to crash to Earth very soon. But don't panic.

A 9.4-ton (8.5 metric tons) mass of metal careening out of orbit toward some unknown location in Earth's vast middle has some folks worried, but it represents no meaningful danger to the public.

The crash, which should take place between March 30 and April 2, just isn't that big, from a historical perspective, and it's vanishingly unlikely to hit you, according to the European Space Agency (ESA). (The agency points out that the odds of being struck by debris from the small station are 10 million times smaller than the odds of being struck by lightning.) [In Photos: A Look at China's Space Station That's Crashing to Earth]

But, it's also worth noting that Tiangong-1 itself is just a fraction of the size of other objects that have fallen (controlled or uncontrolled) to Earth.

Tiangong-1, launched in 2011, was never intended to last very long. It served as a test site for China to try out long-term stays in space and orbital docking maneuvers. Its replacement, Tiangong-2, is already in orbit.

Given its status as a prototype, Tiangong-1 just isn't that big for a spacecraft, let alone a space station. Its 9.4-ton bulk is just 7 percent the size of the 132.3-ton (120 metric tons) Russian space station Mir, which, according to ESA, became the largest object built by humans to fall out of space back in 2001.

Granted, the Mir went through a controlled re-entry over the South Pacific, while no one knows where Tiangong-1 will wind up.

But even among controlled re-entries, the upcoming, uncontrolled descent of tiny Tiangong-1 will be a blip. Back in 1979, NASA tried to crash the approximately 81-ton (73 metric tons) Skylab space stationinto the ocean but missed wildly, with much of the debris winding up outside Perth, Australia.

The Soviet military space station Salyut-2 remains, at 20.2 tons (18.3 metric tons), the largest human-created object to enter the atmosphere completely uncontrolled, after an accident sent it tumbling Earthward in 1973.

At around 19 tons each (17 metric tons), even the nose cones and prototype command modules of the early Apollo tests were bigger than Tiangong-1 when they de-orbited, uncontrolled, throughout the 1960s. (One even remained in orbit until its fiery demise 1985, according to ESA.)

All of which is to say: The Tiangong-1 re-entry should be a spectacular event to follow, but it's not dangerous, or by a historical metric even all that big.