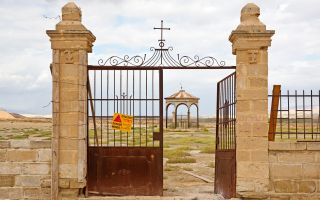 Qasr Al Yahud on the border of Israel and Jordan is the supposed site of Jesus' baptism. Today, it is surrounded by some 3,000 land mines, booby traps and unexploded ordnance.
(Image: © Ziv Koren/Polaris/Newscom)

You'll know you're getting close to Jesus' baptism site in the West Bank when you see the bright yellow signs warning, "DANGER, MINES!"

Officially known as Qasr Al Yahud (literally, "Castle of the Jews"), the supposed site of Jesus' baptism in the Jordan River Valley is surrounded by some 3,000 active land mines, booby traps and unexploded bombs — but not for long. According to the Associated Press, a massive, interfaith project was launched this month to rid the holy site of its buried explosives, most of which have lay hidden since the 1967 Mideast war fought between Israel and the neighboring states of Egypt, Jordan and Syria.

The project is being spearheaded by an international mine-clearing charity called The HALO Trust, the AP reported, which has been funded with about $1.15 million from Israel and private donors. Using dogs, drones, metal detectors and armored bulldozers, the team hopes to rid the West Bank site of all explosives within a year. [Proof of Jesus Christ? 6 Pieces of Evidence Debated]

"To see a site that is visited by over half a million pilgrims and tourists each year and for them to come in their buses and be so close to land mines is very unusual," James Cowan, the head of The HALO Trust, told the AP. "We hope that pilgrims and tourists will be able to visit this site and celebrate the baptism of Christ in the way that was intended."

Jesus' baptism site is considered one of the three holiest sites in Christianity, along with the Nativity Church in Bethlehem (built on the supposed site of Jesus' birth) and the Church of The Holy Sepulcher in Jerusalem (built on the site of his crucifixion).

According to biblical scholars, the historical Jesus was born sometime between 6 B.C. and 4 B.C. and grew up in the village of Nazareth in Galilee. Jesus' baptism by John the Baptist (which would have happened about 30 years later) is considered one of the most historically certain facts about him, along with his birth in Galilee and death by crucifixion sometime between A.D. 29 and 33.

The holy site is nevertheless fraught with religious and political tensions. Israel seized control of the site from Jordan during the 1967 Mideast war, sometimes called The Six-Day War, and fortified the territory with land mines soon after. Some of the 3,000 explosives in the area also include booby traps laid by Palestinian militants and other unexploded ordinance, Israeli officials told the AP.

The site remained closed to the public and closely guarded by the Israel military for several decades. A small swath of explosives was cleared away in 2000 so that Pope John Paul II could visit, and the site finally reopened to tourism in 2011.

Meanwhile, churches have existed near the baptismal waters for more than a thousand years. Today, eight separate churches share the 250-acre (100 hectares) parcel of desert (among other sites in the Holy Land) and often disagree over its management, the AP reported. It took The HALO Trust about four years to persuade all the players to agree on the terms of the mine-clearing project. Reportedly, even Pope Francis had to weigh in.

"We pray and hope that the clearance of land mines around the baptism site will contribute to peace and reconciliation in our region, which is very much needed at this time," Theophilos III, the Greek Orthodox patriarch of the Holy Land, said in a statement.

It is unknown exactly when the site will reopen to the public.