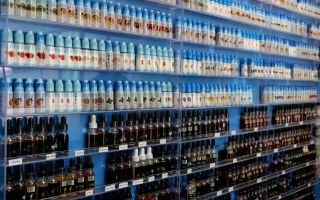 With names like "Banana Pudding," "Blueberry Cinnamon-Streusel Muffin" and "Butter Crunch," the flavoring ingredients in electronic cigarettes sound not only harmless but immensely appealing. But some of the liquids used in e-cigarettes may in fact have highly toxic effects on human cells tested in a lab, a new study reveals.

Researchers in North Carolina found that some of the ingredients used in so-called "e-liquids" are more toxic than nicotine alone and many of them are more toxic to human cells than the main ingredients in these liquids, which are propylene glycol and vegetable glycerin, according to the findings, published today (March 27) in the journal PLOS Biology.

E-cigarettes work by heating a liquid solution composed of propylene glycol, vegetable glycerin, flavorings and typically nicotine, until the liquid vaporizes. [E-Cigarettes: What Vaping Does to Your Body]

But little is known about the potential toxicity and chemical composition of most substances found in e-liquids, the researchers said.

In the new study, the researchers tested 148 e-liquids. They found that the e-liquids contained a total of 143 chemicals, which indicates that the ingredients in e-cigarettes are extremely diverse, said senior study author Robert Tarran, an associate professor of cell biology and physiology at the University of North Carolina School of Medicine.

With more than 7,700 commercially available e-liquid flavors — and the U.S. Food and Drug Administration just beginning to regulate the ingredients in e-cigarettes — a quicker method is needed to screen e-liquids to evaluate their safety and chemical makeup, according to the study.

So, the researchers did just that: In the new study, they developed a way to measure the toxicity of a large number of e-liquids at once. In addition, the scientists looked at how quickly e-liquids can affect the growth of human tissue culture cells — which aren't lung cells, but are good for testing purposes — and whether these e-liquids can kill cells, Tarran told Live Science.

After the researchers had identified some patterns of toxicity, they then used cells taken from people's lungs to confirm these observations, Tarran said.

The study revealed that the more chemicals an e-liquid contained, the more toxic it tended to be. The findings also showed that e-liquids containing either vanillin or cinnamaldehyde, two common flavor compounds widely used in e-cigarettes, were linked with higher toxicity values.

Although the new study looked at human cells in the lab and didn't actually study the health effects of vaping in people, Tarran said he feels that the cells they used have been shown to be highly predictive of lung diseases, such as cystic fibrosis and chronic obstructive pulmonary disease (COPD). This makes him feel confident of their actual predictive value in people, but much more work needs to be done to learn more about the toxicity of e-liquids and the health effects of vaping, he added.

In three previous studies of human cells, Tarran said that he and his research team have found that vaping can lead to changes in the lungs, although the long-term consequences of using e-cigarettes are not yet known. These earlier studies have shown that vaping can suppress the immune system, change secretions in the airways and cause changes to proteins that help detoxify the lungs, suggesting that vaping is, in fact, a toxic burden to the lungs, he said.

Similar screenings of e-liquids could be performed in animals rather than in test tubes, Tarran said. However, animal research would be more time-consuming and expensive, and is not feasible for the more than 7,000 e-liquids being sold, he noted.

There is still a great deal that is not known about the ingredients in e-liquids. But this study suggests that the e-liquids that are highly toxic can be identified and prioritized for further research, Tarran said.

The public should push for additional research on the safety of e-cigarettes and better standards for the ingredients in these products, Tarran said. Most e-liquids do not reveal their chemical contents on the e-cigarette packaging, other than their nicotine concentration and  their ratio of propylene glycol to vegetable glycerin, he said.

To find out more about e-liquids, the researchers have created a searchable database at eliquidinfo.org.