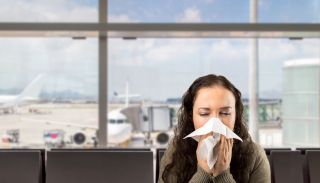 Finally, some good news about airplane travel: If you're on a plane with a sick passenger, you probably won't get sick.

That's the conclusion of a new study that looked at how respiratory viruses spread on airplanes.

Researchers found that only people who were seated in the same row as a passenger with the flu, for example — or one row in front of or behind that individual — had a high risk of coming down with the illness after the flight. All other passengers had only a very slim chance of getting sick, according to the findings, which were published today (March 19) in the journal Proceedings of the National Academy of Sciences.

Media reports have not necessarily presented accurate information about the risk of transmitting infections on an airplane, said Dr. Amesh Adalja, a spokesperson for the Infectious Disease Society of America and a senior scholar at the Johns Hopkins Center for Health Security, who was not involved in the new study. [27 Devastating Infectious Diseases]

These new findings, however, should provide reassurance to airplane passengers that only the people in the immediate vicinity of an infected person may be exposed to respiratory infections and that it won't affect everyone on the plane, Adalja told Live Science.

Prior to the new study, little was known about the risks of directly transmitting common respiratory viruses, such as the flu or common cold, on an airplane, the researchers said. So, to evaluate the risks of infection, the study team flew on 10 different cross-country flights in the U.S during flu season.

The flights ranged in length from 3.5 to 5 hours, and most of the planes were at full capacity. While on board, the researchers tracked the movements and behaviors of passengers and crew within the economy cabin of a single-aisle aircraft, noting how frequently people left their seats or interacted with others —two activities that can spread respiratory infections. Before, during and after the flights, the researchers also collected samples from the air on the plane and from commonly touched surfaces that could be contaminated with viruses, such as seat-belt buckles, tray tables and bathroom door handles.

An analysis of those samples turned up no evidence of the presence of 18 common respiratory viruses.

Viruses on a plane

The researchers used the data on passenger and crew movements to create a computerized model simulating the risk of transmitting the flu from an infected passenger sitting in an aisle seat in the middle of the aircraft. This seat location has the greatest potential to share an infection because this person will have more contact with other passengers while moving through the cabin, and people in aisle seats leave their seats more frequently, according to the findings. (The study showed that 80 percent of passengers in aisle seats, 62 percent in middle seats and 43 percent in window seats moved from their seats at least once during the flight.)

The analysis showed that passengers sitting within two seats on either side of a person infected with the flu, as well as those sitting one row in front of and one row behind this individual, had about an 80 percent chance of getting sick. But other passengers were largely safe from infection; they had a less than 3 percent chance of coming down with the flu, according to the model. [Germs on the Big Screen: 11 Infectious Movies]

The study used rigorous measurements and showed the contact patterns and movements of passengers and crew members on the plane, which can facilitate or hinder the transmission of respiratory viruses, Adalja said. When traveling during flu season, the best way that passengers might potentially avoid the illness is by getting a flu shot, he added.

If you get stuck next to someone who's sick, chances are, you won't be able to change your seat. But there are still some steps you can take to reduce your chances of catching their illness. If there is a passenger nearby who is coughing or sneezing, look away from them, if possible, Adalja recommended. To minimize your exposure to germs, avoid touching your face and eyes, limit your contact with shared surfaces and use hand sanitizer, he said.

There were some limitations of the new study, however. It did not evaluate flights shorter than 3.5 hours or longer than 5 hours, and it looked only at single-aisle planes. In addition, the researchers built their model using data from just 10 flights. The researchers also acknowledged that some transmission of respiratory infections could occur while passengers are waiting in the airport or when they're boarding and exiting the plane.