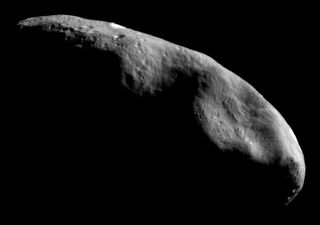 This photo of the asteroid Eros was taken during the NEAR Shoemaker mission.
(Image: © NASA)

Russian scientists have a plan to deal with a hypothetical asteroid threat that's straight out of the movie "Armageddon."

A team of government scientists has proposed that nuclear weapons well within the power of those already developed could be used to break up incoming asteroids, protecting the planet from a major asteroid strike. They then demonstrated, in a paper published online March 8 in the Journal of Experimental and Theoretical Physics, the effect of a nuclear strike on an asteroid, using scale model "asteroids" and powerful lasers.

Striking a tiny model asteroid with a powerful laser on Earth is obviously not the exact same thing as striking a full-size asteroid with a laser out in space. But there's a reasonable degree of comparison between the two situations. [Crash! The 10 Biggest Impact Craters on Earth]

The researchers took careful steps to make sure the scale models were created from the same materials and had similar structures to chondrites (common, stony asteroids). And the immense energy deposited by a pulsed laser onto a single point on the model was reasonably similar to the effect of a nuclear blast on a single point on the asteroid's surface. They wrote that their experiment showed they could use a a 3-megaton bomb to blast a 656-foot-wide (200 meters) asteroid — 10 times wider than the asteroid that detonated over Russia in  2013 — to harmless bits that would spread out and miss Earth.

The first thermonuclear weapon ever detonated had a strength of about 10.4 megatons, according to the Nuclear Weapon Archive. That bomb was detonated on Elugelab Island, Enewetak Atoll, in the Pacific Ocean in 1952.

There are other methods for diverting incoming asteroids, the researchers acknowledged, like the gravity tug— using the force of gravity to move the space rock to a better orbit. But they require more advanced knowledge of the incoming strike and planning. The advantage of a nuclear strike, they wrote, is that it can work against even surprise asteroids discovered late.