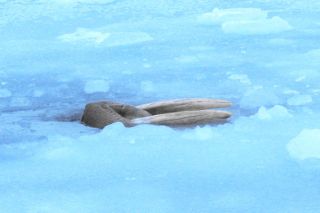 Only the lips and teeth of this walrus are visible, but is it chilling out or popping up for air?
(Image: © Eliezg/CC 3.0)

A "snorkeling" walrus has achieved its 15 minutes of fame after a photo of the flippered behemoth was tweeted along with this oddly charming wildlife fact: "Good morning, walruses sometimes hook their teeth on the ice and relax."

But is this delightful post — which has skyrocketed to more than 37,000 likes since it was tweeted Wednesday (March 14) — accurate?

It could be: Walrus are known to prop their teeth on ice when they're resting in the water, wildlife experts told Live Science. But the walrus could also be surfacing for a quick breath of air before returning to the seafloor to hunt for clams and worms, they noted. [My, What Sharp Teeth! 12 Living and Extinct Saber-Toothed Animals]

The photo was taken near St. Lawrence Island, off the coast of Alaska in the Bering Sea, according to Wikimedia Commons, where the image is posted. It shows a male walrus that seems to be dangling from its tusk-like teeth amidst loose or slush ice, said Anthony Fischbach, a wildlife biologist at the U.S. Geological Survey, in Alaska.

The Pacific walrus (Odobenus rosmarus divergens) spends most of its time feeding at the bottom of the sea, "but they need to come up to breathe and to rest occasionally," Fischbach told Live Science. Typically, the predators prefer to rest out of the water, on the ice or land where it's warmer, he noted.

To get on the ice or land, walrus use these long teeth — called sabers because they're canine teeth, not incisors like an elephant's tusks — to haul themselves out of the water. Being on the ice or ground "lets them rest and sleep without having to worry about sinking," Fischbach said. In addition, walrus tend to rest in groups on land because they're highly social creatures.

But certain conditions may keep a resting walrus in the water. If it's extremely windy, cold or rainy, walrus tend to stay in the water, where it's warmer, according to a 2017 study co-authored by Fischbach in the Journal of Mammalogy.

If it is actually resting (instead of getting a quick gulp of air), this particular walrus may be using its pharyngeal pouches to help it stay afloat, Fischbach said. These expandable pouches are located on each side of the walrus' esophagus, and can hold up to 13 gallons (50 liters) of air, according to a 1960 study published by the Arctic Health Research Center.

"In my own experience at least eight walrus have been seen sleeping in the water, and each had its pouches inflated," study researcher Francis Fay, with the U.S. Public Health Service, wrote in the 1960 report. He explained that when a sleeping male walrus was killed, the air from its pharyngeal pouches escaped like air from a popped balloon.

"The carcass sank immediately, demonstrating the high … [weight] of the animal and the importance of the inflated pouches in maintaining his position at the surface," Fay wrote. Female walrus weigh less than males, and the air retained in their lungs is often enough to keep them afloat, so they don't inflate their pouches as often as males do, Fay added. [Giants on Ice: Gallery of Walruses]

As for whether the walrus in the photo is resting or relaxing, it's hard to say — "you'll have to ask it if it's relaxing," joked Jack Tseng, a paleontologist and an assistant professor of health science at the Jacobs School of Medicine and Biomedical Sciences at the University of Buffalo, in New York.

However, it's just as likely that the walrus was coming up for air between bouts of foraging underwater, Tseng said. "It could be that it is just finding a hole and enlarging it, or building a hole out of the ice with its teeth so it could come up for air," he said.

Walrus aren't the only animal known to snorkel. Alligators that find their waters iced over sometimes stick their snouts out, too, Live Science previously reported.