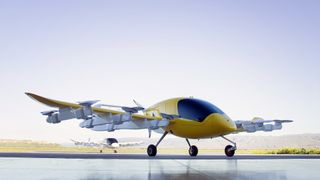 A "flying car" company funded by Google co-founder Larry Page seems to finally have a prototype that looks something like a personal aircraft people might actually use.

The company, Kitty Hawk, released a video and statement debuting the vehicle, called Cora, today (March 13). Cora looks a bit like a tiny, one-seater airplane, but its wings are studded with small, upward-facing propellers that allow it to take off and land vertically. According to the video, the Cora is fully automated and fully electric, and requires no piloting skills to operate.

That's a far cry from another device Kitty Hawk unveiled in April 2017, called the Flyer, which looked more like a cross between a Jet Ski and a giant, store-bought quadcopter. [Science Fact or Fantasy? 20 Imaginary Worlds]

In Cora's branding, Kitty Hawk ditched the phrase "flying car" and replaced it with "air taxi." The company suggested a long-term plan to bring a commercial air-taxi service to New Zealand.

The New Zealand bit is interesting, because the statement Kitty Hawk released is as much an advertisement for the regulatory environment in the small country off the Australian coast as it is a promotion for this new device.

Kitty Hawk, which launched in California, repeatedly praised New Zealand's "forward-thinking regulatory environment" and suggested it would have been impossible to launch Cora in the U.S.

A history of the project detailed on Cora's website pointedly notes that several of the aircraft's early design milestones took place in California, but that sometime between the craft's first human flight, in August 2017, and signing an agreement with New Zealand October 2017, the company made the decision to "partner" with the far-off country.

Included in the company's fact sheet about Cora: what the air taxi will do if its propellers fail in midair. Cora can apparently deploy a parachute to stop its fall. The company also noted that all of the propellers are powered independently — so a failure of one wouldn't knock out all of them — and that the flight control system has multiple, redundant computers.

When can the public expect to ride Cora? Kitty Hawk said it doesn't have a specific timeline for that.