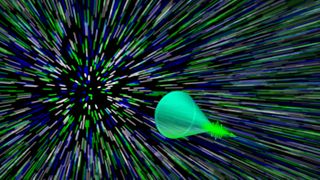 Under normal circumstances, the ultimate limit on information transfer — the bandwidth of the universe — is one bit per fundamental particle, moving no faster than the speed of light. That's in the "classical universe," the way things behave before quantum physics gets involved.

Here's where that limit comes from: If you want to get a message made up of the bits "1" or "0" to your friend a light-year away and all you have is a single photon, you can encode that single binary number into the photon and send it whizzing off toward your friend at light speed. That friend will receive the message a year later. If your friend wants to use that photon to get a binary message back to you, you'll have to wait another year. If you want to send more information in that time, you're going to need more photons. [Album: The World's Most Beautiful Equations]

But in a new paper published Feb.8 in the journal Physical Review Letters, a pair of a quantum physicists showed that it's theoretically possible to double that bandwidth.

The technique described in the paper, titled "Two-Way Communication with a Single Quantum Particle," doesn't allow you to send your friend two bits with one particle. But it does allow you and your friend to each send one another one bit of information using the same particle at the same time.

If two people want to pull that trick off, the researchers wrote, they have to put the particle in a "superposition of different spatial locations."

"That's usually described as being in two places at the same time," study co-author Flavio Del Santo, of the University of Vienna, told Live Science.

The reality is a bit more complicated, but imagining the particle in two places at once is a useful shortcut to understanding what's going on here.

That way, Alice and Bob (that's what Del Santo and his co-author Borivoje Dakić, of the Institute for Quantum Optics and Quantum Information in Austria, called their quantum communicators) each have the same particle at the start of the communication. And each of the communicators, Del Santo said, can encode a single bit of information, a 1 or a zero, into the particle.

Their communicationis still limited by the speed of light. When Alice encodes a "1" into the particle, Bob doesn't immediately see it. She still has to send the particle back to him. But this situation is special, because Alice and Bob can each encode a bit of information into the particle and send it back toward each other at the same time.

The message each of them sees when the particle arrives will be the result of their own bit of information and their interlocutor's added together. If Alice encoded a zero and Bob a 1, they'll each see a 1. But because Alice knows she put a zero in, she'll know Bob put in a 1. And because Bob knows he put a 1 in, he'll know Alice put in a zero. If both put in 1, or both put in zeros, the result will be zero.

In each situation, both receivers will know what bit the other sent — and they'll have cut in half the time it usually takes for two people to send one another bits using a single particle.

This works in the real world

The paper, published in the journal Physical Review Letters, was purely theoretical, but Del Santo and Dakić partnered with a team of experimentalists at the University of Vienna to show that the method can work in the real world.

This portion of their results hasn't yet been through peer review and publication in a journal, but it's available on the preprint server arXiv.

The researchers used beam splitters to separate photons into spatial superposition, meaning they were, in a sense, in two places at once. By doing so, the scientists wrote, they pulled off just what the first paper described: encoding bits into split photons, mixing them back together and interpreting the results.

The researchers also showed that, with a slight modification, this technique could be used to conduct perfectly secure communication. If one of the communicators, Alice, inputs a random string of bits and Bob encodes the true, coherent message, no eavesdropper would ever be able to figure out what Bob was telling Alice without knowing what Alice had encoded, Del Santo said.