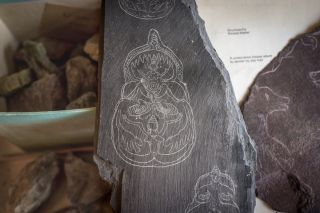 A famed archaeologist well-known for discovering the sprawling 9,000-year-old settlement in Turkey called Çatalhöyük seems to have faked several of his ancient findings and may have run a "forger's workshop" of sorts, one researcher says.

James Mellaart, who died in 2012, created some of the "ancient" murals at Çatalhöyük that he supposedly discovered; he also forged documents recording inscriptions that were found at Beyköy, a village in Turkey, said geoarchaeologist Eberhard Zangger, president of the Luwian Studies Foundation. Zangger examined Mellaart's apartment in London between Feb. 24 and 27, finding "prototypes," as Zangger calls them, of murals and inscriptions that Mellaart had claimed were real.

"He used the same approach for over 50 years," Zangger told Live Science. "He would first acquire a tremendously broad and deep knowledge [about the area he was interested in]. Then, he would try to use this knowledge to develop a coherent historic panorama," Zangger said. This process in itself is not uncommon for an archaeologist or historian. The only difference is that legitimate researchers then look for evidence that either supports or refutes their ideas. Instead, "Mellaart would fabricate drawings of artifacts and translations of alleged documents to reinforce his theories," Zangger said. [See Photos of the Remains of Çatalhöyük]

Request from beyond the grave

In 1995, Mellaart wrote to Zangger about several inscriptions, supposedly from a Turkish village called Beyköy, that were written in an ancient language called Luwian. Mellaart claimed that he could not read or write Luwian but that he was planning to describe his finding in a scientific publication. Mellaart had mentioned the inscriptions briefly in an article he published in 1992 in the Bulletin of the Anglo-Israel Archaeological Society journal. [Cracking Codes: 5 Ancient Languages Yet to Be Deciphered]

In a note that Zangger found in the apartment, Mellaart wrote that, should the Beyköy inscriptions not be fully published before his death, researchers should publish them for him. Zangger, along with Fred Woudhuizen, an independent researcher, took up the project and published details about one lengthy inscription in December, in the journal Proceedings of the Dutch Archaeological and Historical Society. That inscription supposedly dates back 3,200 years and tells of a Trojan prince named Muksus. Some scholars suspected it could be a forgery.

It now appears that many, if not all, of the unpublished inscriptions are forgeries, Zangger said, noting that he can't be totally certain that the inscription published in December was completely made up. The documents found in Mellaart's apartment show that far from being unable to read Luwian, Mellaart was skilled in the ancient language, Zangger said.

Zangger said he feels betrayed by the fact that Mellaart asked researchers to publish his forgeries for him after his death. "I feel abused," Zangger said. Correspondence found in his apartment indicate that Mellaart tried to get others interested in publishing the forgeries before he died, Zangger said, adding that "he had no scruples when it came to harming other people's careers."

In the apartment, Zangger also found pieces of schist engraved with initial sketches of murals that Mellaart claimed to have discovered at Çatalhöyük — suggesting these were also forgeries. Pictures of the sketches were published online by the Luwian Studies Foundation.

Mellaart first published descriptions of the Çatalhöyük murals in 1962 in the magazine Archaeology, and published more examples over the following decades.  Some of the murals that Mellaart described in publications showed only drawings and no actual photographs.

How many of the Çatalhöyük murals are fake is not yet clear. Mellaart "produced a mélange of published facts, unpublished data and imagination. It is virtually impossible to disentangle," Zangger said.

Mellaart's career was not without controversy. In 1964, he was accused of inadvertently aiding smugglers trying to sell stolen artifacts and was barred from excavating in Turkey. "He still had half a century to live. During this time, he appears to have increasingly entered an imaginary world. Maybe he wanted to somehow retaliate by misleading his colleagues in the field," Zangger said.

The 1995 letter to Zangger shows both the depth of Mellaart's historical knowledge and imagination. It provides a detailed description of what the Beyköy texts say, naming numerous ancient places, people and events. Mellaart created an elaborate backstory for the texts, getting around his false claim that he couldn't read Luwian by saying that the texts had been partially deciphered by other researchers who were all dead by 1995. "Fred Woudhuizen and I identified about 260 people and place names. It is much like a Harry Potter kind of world. The names are consistent and apparently make sense. Mellaart was evidently a genius in some ways. But he misused his talents, thereby causing tremendous damage to the field," Zangger said.

Ian Hodder, who currently leads excavations at Çatalhöyük, declined to comment on the situation.

Editor's Note: An earlier version of this story said that there is no photograph of a mural from Catalhoyuk that shows a volcano exploding. In fact, there is a published photograph of that mural that appears to have been taken at the time of excavation.