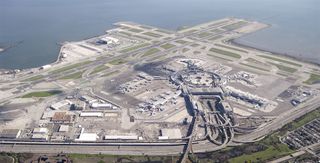 San Francisco International Airport is one of the areas at highest risk of flooding due to land subsidence and rising seas. Up to half of the runways and taxiways at the airport could be underwater by 2100, new research suggests.
(Image: © Calbookaddict at English Wikipedia)

Large swaths of the Bay Area, including the region's biggest airport, are sinking. As a result, the area could face catastrophic flooding when sea levels rise, new research suggests.

The findings suggest the Bay Area could be even more prone to flooding than current emergency hazard maps or models of climate change predict.

"The ground goes down, sea level comes up, and flood waters go much farther inland than either change would produce by itself," Manoochehr Shirzaei, an assistant professor of Earth and space exploration at Arizona State University and a member of NASA's Sea Level Change Team, said in a statement.

Shirzaei and his colleagues analyzed satellite-based interferometric measurements of elevation from 2007 to 2011. This highly precise measurement can detect minute changes in elevation — as small as a 0.03 inches (1 millimeter).

The team found that while most parts of the Bay Area were sinking by just 0.06 inches (2 mm) a year, other areas were falling at 10 times that rate.

Many of the fastest-sinking areas were built on top of landfill. For instance, parts of Treasure Island, which should more rightly be named "Trash Island," are now sinking at a rate of 0.5 to 0.75 inches (12 to 20 mm) a year. The artificial island, located partway between San Francisco proper and Oakland, was constructed out of trash in time for the 1939 Golden Gate International Exposition.

Another high-profile area at risk? The San Francisco International Airport (SFO), which was also built on landfill. About 200,000 flights a year land on runways that are perched right by the water of the San Francisco Bay. The study found that SFO is sinking enough that by 2100, half of the runways and taxiways will be underwater.

Foster City, located partway between San Francisco and San Jose, is also at high risk. The landfilled area is home to several high-tech companies — and is likely to be significantly flooded by 2100, the study found.

Area hazard maps that predict flood risk, such as those used by the Federal Emergency Management Agency, need to account for both sinking land and rising seas, the researchers suggested. (FEMA currently has maps that account for sea level rise, but not both sea level rise and subsidence).

This isn't the first study to highlight the flood risks of climate change. A study published Nov. 2017 in PLOS One found that 13,000 archaeological sites in the U.S., including the oldest English settlement in the country, could be submerged by 2100, thanks to climate change.

The findings were published today (March 7) in the journal Science Advances.