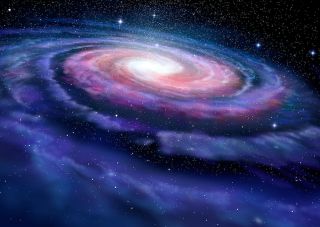 Our galaxy, the Milky Way, is on a collision course with its neighbor Andromeda. Although the collision will take place about 4 billion years from now, astronomers have long placed bets on which of the two star systems is more likely to survive the mega crash.

Until recently, Andromeda, currently roughly 2.5 million light-years away from the Milky Way, was the clear favorite. But a new study suggests the outcome of the cosmic smashup might be closer to a tie.

In a paper published online Jan. 10 in the journal Monthly Notices of the Royal Astronomical Society, a team of astronomers led by Prajwal Kafle from the University of Western Australia estimated that the mass of Andromeda, also known as M31, is much lighter than previously thought. This, Kafle said, puts Andromeda's mass on par with the Milky Way's, which means there will be no clear winner in the future intergalactic collision.

"I measured the M31's mass to be 800 billion times heavier than the sun, which is almost one-third of what scientists have been claiming for a few decades," Kafle told Live Science in an email. [Stunning Photos of Our Milky Way Galaxy]

But how is it possible that Kafle's measurement could be so significantly different? The researcher said he used a different technique based on the escape velocity, or the velocity that is required for a body such as a star to escape the gravitational pull of another body — for example a galaxy. A higher required escape velocity means an object has a higher gravitational pull, and therefore a larger mass.

"From the measure of the speed with which we propel our rocket out to the space, a person standing on Mars or at [a] distant planet can work out what is the strength of Earth's gravity," Kafle said. "I used similar logic to convert high-speed stars in M31 to calculate the strength of M31's gravitational force ­— or in simpler terms, its mass."

To estimate the mass of a galaxy, the researchers need to take into account not just the matter visible in telescopes, but also the elusive dark matter. This is a form of matter that exerts a gravitational pull but does not interact with ordinary light at all. Dark matter has never been directly observed, but its existence was deduced in the 1960s when scientists realized that stars in galaxies move as if there is much more matter than was observed.

An influential 1980 paper by astronomer Vera Rubin postulated that galaxies must contain six times as much dark matter as visible mass. Because there is much more dark matter than the visible mass in the universe, it's mostly the gravitational force of this dark matter that the 'escaping stars' that Kafle studies have to overcome. And it appears the previous methods might have overestimated the amount of dark matter present in Andromeda, the researchers said.

Past methods of modeling a galaxy's mass required knowing both the radial velocity, or the rate at which stars in the galaxy move towards or away from an observer on Earth, and the motion of the stars across the sky relative to the sun, the so-called proper motion.

"Our telescopes are not sensitive enough to detect proper motion of stars in M31 galaxy," Kafle said. As a result, "other methods that need proper-motion information will have to make some assumption about the motion."

The method used by Kafle, on the other hand, does not require knowing the proper motion.

So, what exactly will happen once the two spiral galaxies, which now appear surprisingly similar, collide?

Kafle said that no one really knows. "It remains to be simulated how exactly two galaxies will interact," he said. "This is something we aim to do in the future."

One thing is certain: The event will have apocalyptic consequences, and our solar system is unlikely to survive unharmed. Humanity's only hope is to solve intergalactic travel by then, .