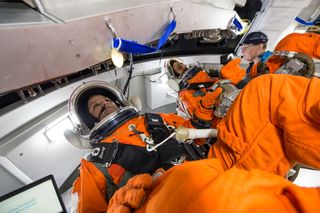 Crews inside a mockup of the Orion spacecraft test hand controller and cursor devices. As NASA prepares its next human spaceflight system, it is investing in a spacesuit that astronauts could live in for up to six days.
(Image: © NASA)

The new suits, called the Orion Crew Survival Systems Suits (OCSSS), will be worn by astronauts on NASA's next-generation human spacecraft, Orion, which will be able to carry humans well beyond low Earth orbit. While the vehicle isn't big enough to support a nine-month trip to Mars, Orion could carry humans around the moon and back.

Like the space shuttle before it, Orion will be equipped with a toilet, but NASA is making contingency plans in case of emergencies, including the possibility that the Orion capsule depressurizes and the astronauts have to remain in their suits to survive. In fact, the agency wants astronauts to be able to survive in their suits for up to six days — meaning the men and women would have to be able to do things like eat, urinate and defecate without taking them off. [How to Use the Bathroom in Space]

"That is a really long time," Kirstyn Johnson, a NASA engineer who is leading the design of the internal systems for the Orion launch and landing suit, told Space.com. It's a long time to be in such a small space under the best of conditions, "but then to live in a suit with all of your waste right by you for that long of a time, it could get gnarly pretty quickly."

Johnson and her team have to try and avoid potentially gnarly outcomes, and keep astronauts safe on humanity's return to the moon.[The Evolution of the Spacesuit in Photos]

Since the start of the space shuttle era, spacesuits haven't been required to provide long-term bathroom solutions. There are two main types of suits worn by astronauts today: flight suits for launch and entry; and the giant, puffy white space suits (extravehicular mobility unit) used in extravehicular activities (EVAs, or spacewalks). Both those suits come equipped with what are called maximum absorbency garments (MAG's) — which are effectively diapers — because astronauts have no reason to remain in the suits for more than about 10 hours at a time (often much less). Once out of the spacesuit, astronauts use the onboard toilets. [Spacesuit Chic: Cosmic Fashion Evolution Explained (Infographic)]

A big advantage of the diapers is that they're simple to put on and take off, Johnson said.

"[The MAG] may not work 100 percent of the time — you might have leakage — but it gets the job done without us having to put too much effort into it up front in terms of design and certifying it," Johnson said.

The MAG system might sound unpleasant, but consider that there were no toilets on any of the spacecraft that carried humans to the moon. For urine collection, the all-male crewmembers wore condom catheters that fit over the penis like a condom, with a tube at the end to collect the liquid, which was pulled into a bag attached to the outside of the suit. The astronauts also had an external urine-collection system that was essentially the same as the one built into the suit. The Apollo astronauts defecated into fecal collection bags that were part of their flight suit. This system was so prone to failure that the crewmembers were specifically placed on a high-protein diet to reduce the amount of waste they produced. The astronauts were also responsible for sealing and disposing of the filled bags. The longest Apollo mission was 12 days.

In late 2016, NASA announced the "Space Poop Challenge," an open call for designs for a better waste-disposal system for spacesuits. (Despite the title, Johnson said the call was for both urine- and fecal-management systems.)

While the competition did reveal new designs, they would all require additional development to figure out how to integrate them into a suit, Johnson said. There was "nothing we could use fairly quickly in the Orion program."

So for now, "we're kind of gravitating back to what astronauts used during Apollo," Johnson said of the Orion spacesuit system.

The suits will include a fecal bag that is very similar to those used in the Apollo suits, and, for men, they will also use condom catheters, which remain the simplest, most straightforward approach, Johnson said. [Why Space Travel Can Be Absolutely Disgusting]

But one glaring problem that Apollo and subsequent human space missions never solved was how to make an in-suit, urine-collection systems for women. By the time NASA welcomed its first class of women astronauts in 1978, the space shuttle program was only a few years away from its first launch, so the female astronauts used the diaper system and onboard toilet. (In 1981, NASA engineers filed a patent for a urine-collection device for women that included a vaginal insert to keep urine out; it was never utilized in operational space suits, however.)

In microgravity, liquids don't flow the way they do on Earth; they tend to glom together and "stick" to surfaces. So, for example, if someone cries in space, the tears will form bubbles that "stick" to the person's eyes or eyelashes, rather than float away. The toilet on the space station uses a vacuum system to pull fluids away from the body. It includes a personal attachment for each astronaut.

"For females, it gets a little harder, obviously, because of the geometry of a person's body, and then you have to deal with issues like pubic hair," Johnson said of the in-suit system. Pubic hair poses a challenge because liquid tends to glom onto it in microgravity. Johnson said the main concern is liquid lingering in that area and causing a skin breakdown. Plus, the system also has to be secured in place (the condom catheter is essentially its own attachment mechanism), and pubic hair can also make it difficult to use a sticky attachment mechanism. Johnson and her colleagues also have to take into consideration things like how the waste-disposal system can operate while a woman is on her period.

While it's possible that some of these problems could be avoided if female astronauts were to remove their pubic hair and go on birth control (which can reduce the occurrence of periods), Johnson said that's beyond what NASA would reasonably ask of its astronauts.

"You want a design that any normal, functioning woman should be able to use without putting additional requirements on them," Johnson said. "So you have to design something that can basically encompass most of their public hair, while also protecting them from infections like [urinary tract infections] without fecal matter getting in the way. Stuff like that."

The female urine-disposal system isn't fully developed yet, and some aspects of it are proprietary, Johnson said, so she can't release all the details. But the general design is similar to the tube system used by female fighter pilots to relieve themselves during long flights, or members of the military who may not be able to stop a task to relieve themselves. The device essentially has to be the size of a sanitary napkin, to encompass an entire area. [Showering in Space: Astronaut Home Video Shows Off 'Hygiene Corner']

Not just a space problem

While this might seem like a uniquely space-based problem, Johnson said she was surprised to discover the number of technologies that exist on Earth for helping people relieve themselves without having to go to the toilet. Many of those technologies are aimed at people who are physically incontinent, but there are other uses for these devices as well, particularly for women.

"You start looking at the camping industry, and you start seeing a lot of these portable urination devices that you can carry around with you so you don't have to squat in the middle of the forest. [There are] these paper bags that you can take to a concert and women pull out of their purse so they don't have to sit on a disgusting toilet," Johnson said. "It was almost a revelation for me as a female to see all these products — like, who knew these existed? And it's kind of taboo to talk about but it's interesting, because it feeds into stuff like this that we're trying to do with spacesuits."