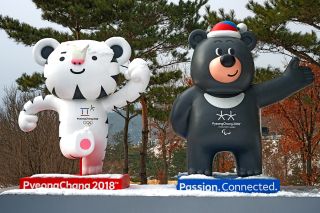 Olympic participants are generally muscular and fit, physically primed by years of training to perform on the international stage. However, two notable exceptions this year are rotund, squishy and a little clumsy, and they won't be winning any medals for their athletic prowess.

Nevertheless, they serve as iconic emblems of the Winter Games and of the culture and folklore of the Olympics' host country, South Korea. They are the official Olympic mascots — a white tiger named Soohorang, representing the 2018 Winter Games, and an Asiatic black bear named Bandabi, serving as the mascot for the 2018 Paralympics.

Visualized cartoonishly, these anthropomorphized animals are tubby and smiling and deliberately cute. But the Asiatic bear and white tiger also have a long and storied past in the Korean peninsula, appearing as pivotal figures in its culture and history, and featured prominently in paintings and sculptures. [Iconic Cats: All 9 Subspecies of Tigers]

Both animals appear in Korea's origin story, according to the "Samguk Yusa," or "Memorabilia of the Three Kingdoms," a collection of Korean historical accounts, legends and folktales dating to the 13th century. In the tale, a bear and a tiger undergo a series of grueling trials to become human. The tiger fails, but the bear triumphs and is transformed into a woman, later giving birth to Korea's founder, according to the legend.

Olympic mascots are often animals that are representative of the host countries — but not always. The very first mascot, nicknamed Schuss and appearing unofficially at the 1968 Olympics in Grenoble, France, was a red ball topping an S-shaped, blue and armless body, balanced on what appeared to be a set of skis, according to the International Olympic Committee (IOC).

The 2012 London Summer Games mascots, Wenlock and Mandeville, were even weirder. Wenlock was a metallic being whose body was born of the steel left over from building the London Olympic Stadium, according to the IOC. A light on Wenlock's head was borrowed from the iconic London cab, and his giant, cyclopean eyes were meant to represent camera lenses "filming everything," the IOC reported.

The Pyeongchang Organizing Committee for the 2018 Olympic and Paralympic Winter Games (POCOG) introduced Soohorang and Bandabi to the world in an online statement in June 2016. The white tiger is thought to be a sacred guardian animal, a role that is mirrored in part of Soohorang's name — "Sooho," which means "protection" in Korean, according to the statement.

"The tiger is one of the most familiar animals in Korea, appearing in art and literature from ancient times till today," Bae Ki-dong, director of the National Museum of Korea, recently told The Korea Times.

White tigers are a variant of the Bengal tiger (Panthera tigris tigris), and their unusual coloring can be traced to a mutation in a single pigment gene. However, they haven't been seen in the wild since 1958, Live Science previously reported.

South Korea was home to Siberian tigers, also known as Amur tigers, and the big cats were once widespread in Korea, Bali, Indonesia and China. Now, however, they are found primarily in eastern Russia, with small populations in China and North Korea, according to National Geographic. It is unclear when tigers disappeared from the southern part of the Korean Peninsula, though one account describes the killing of "the last Korean tiger" in 1921 in the coastal city of Gyeongju, South Korea, The Seoul Times reported.

The species is widely distributed in Asia, but in South Korea, the bears were hunted nearly to extinction by the beginning of the 21st century, according to the International Union for Conservation of Nature and Natural Resources (IUCN). A reintroduction program helped to boost their numbers, and by 2015, approximately 40 bears were living in South Korea's Jirisan National Park, the IUCN reported.

As it happens, Soohorang is not the first tiger to represent the Republic of Korea as an Olympic mascot. During the 1988 Summer Olympics in Seoul, an orange Amur tiger named Hodori — a combination of the Korean words "ho" for "tiger" and "dori," a word for boys —held the place of honor, the IOC reported.