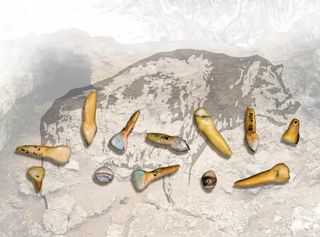 Different views of the two Neanderthal teeth that were likely partially digested by an ancient carnivore, such as a hyena. The teeth were found in Mousterian, an archaeological site in France.
(Image: © Collage by G. Delvider/UMR PACEA CNRS, Rights Pradelles excavation team)

About 65,000 years ago, a large carnivore — perhaps a cave hyena — chomped down on the face of a (likely dead) Neanderthal. Then, that carnivore partially digested two of the hominin's teeth before regurgitating them, a new study suggests.

The finding overturns a previous analysis of the regurgitated teeth. Until now, scientists thought the incisors belonged to ancient cattle or deer, the study's researchers said.

The reason for the mix-up is simple: When the large carnivore partially digested the teeth, the animal's digestive juices altered the chompers' shape, making them difficult to identify, Bruno Maureille, director of research at the National Center for Scientific Research (CNRS), in Paris, told Live Science. [In Photos: Neanderthal Burials Uncovered]

The two teeth were found at the archaeological site of Marillac (also known as Les Pradelles), near the village of Marillac-le-Franc in the west of France, during excavations lasting from 1965 to 1980.

This site has been a gold mine for anthropologists. During the Late Pleistocene, Neanderthals  — which went extinct about 40,000 years ago and are modern human's closest relative — used a cave there as a hunting camp, where they butchered animals before carting them off to another location to eat. In all, researchers have unearthed about 17,000 reindeer bones, as well as the bones of horses and bison at Marillac, the researchers said.

In addition to butchered animal bones, the site also contains Neanderthal bones that have similar butchery marks on them. These marks could indicate that the Neanderthals there engaged in cannibalism, Maureille said. Or it could be that the Neanderthals butchered the hominin bones for rituals, or perhaps to practice butchery in general, study co-researcher Alan Mann, a professor emeritus of anthropology at Princeton University, told Live Science.

Either way — that is, whether or not Neanderthals cannibalized their peers — a Neanderthal's (or several Neanderthals') toothy remains ended up on the cave floor, where a large carnivore found and munched on them, the researchers said.

"We don't know exactly what was going on, but [the Neanderthals] must have left skulls or parts of the face there, because cave hyenas came in and ate them," Mann said.

The cave hyenas likely didn't have a problem eating the thinner bones of the face, but teeth are harder to digest, Mann said. So, the hyenas likely regurgitated the teeth, whose shape the predators' guts had already altered.

The researchers noted that if the carnivore was, in fact, a hyena, it wouldn't have looked like a modern variety. Rather, it would have been the larger, now-extinct hyena that lived in ancient Europe, Maureille said.

"At that time, it was probably the most dangerous carnivore in Western Europe," Maureille said. "When you see the size of a hyena mandible, it is something that is more than impressive."

The finding shines light on "new cases of interaction between human and carnivores in Paleolithic times," an important discovery given that "humans and carnivores compete for the same prey, shelter (caves and rock-shelters), territories, and resources, Nohemi Sala, a postdoctoral researcher from the Joint Center for Research into Human Evolution and Behaviour at the Complutense University of Madrid, told Live Science in an email. Sala was not involved in the study. [In Photos: Hominin Skulls with Mixed Traits Discovered]

However, Sala noted that the study is based exclusively on the teeth's macroscopic features. "In the future, it would be interesting [to employ] the use of microscopic techniques, such the scanning electron microscope, to comparatively evaluate other agents responsible [for] the surface modifications," she said.

This isn't the first evidence of an ancient hyena chowing down on a hominin. A hominin leg bone found in a Moroccan cave has tooth marks on it that were likely made by the ancient beast, Live Science reported previously.

The study was published in December in the journal Paleo.