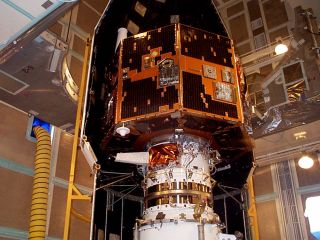 An amateur astronomer has made contact with a long-lost NASA satellite, the agency announced Tuesday (Jan. 30).

The Imager for Magnetopause-to-Aurora Global Exploration (IMAGE) satellite was launched in March 2000, and exceeded its initial two-year mission by operating through 2005. However, NASA controllers lost contact with the satellite in December 2005, bringing the mission to an abrupt end.

Now, engineers from NASA's Goddard Space Flight Center have confirmed that a signal detected by the amateur astronomer (who was not named in the statement) is actually from the IMAGE satellite. The engineers used NASA's Deep Space Network — which consists of a series of ground-based radio telescopes — to identify the signal. [In Photos: Spotting Satellites and Spaceships from Earth]

"On the afternoon of Jan. 30, the Johns Hopkins Applied Physics Lab in Laurel, Maryland, successfully collected telemetry data from the satellite," NASA officials said in a statement. "The signal showed that the space craft ID was 166 — the ID for IMAGE. The NASA team has been able to read some basic housekeeping data from the spacecraft, suggesting that at least the main control system is operational."

IMAGE was the "first satellite mission dedicated to imaging the Earth's magnetosphere, the region of space controlled by the Earth's magnetic field," according to NASA. The Earth's magnetic-field lines connect to the planet at two poles that lie very close to the geographic North and South poles. The magnetic-field lines rise up from those contact points and curve around the planet, creating a sort of magnetic bubble. The field lines influence the movement of plasma, a gas consisting of charged particles (electrons) and charged atoms (called ions), which can then be measured by in-situ instruments. Previous studies of the magnetosphere relied on stitching together a global picture of this region based on in-situ measurements taken at various locations, according to NASA.

"Instead of such in situ measurements, IMAGE employed a variety of imaging techniques to 'see the invisible' and to produce the first comprehensive global images of the plasma populations in the inner magnetosphere," according to NASA's website. "With these images, space scientists were able to observe, in a way never before possible, the large-scale dynamics of the magnetosphere and the interactions among its constituent plasma populations."

NASA says it's not done yet with IMAGE.

"Scientists and engineers at NASA’s Goddard Space Flight Center in Greenbelt, Maryland, will continue to try to analyze the data from the spacecraft to learn more about the state of the spacecraft," agency officials said in the statement. "This process will take a week or two to complete as it requires attempting to adapt old software and databases of information to more modern systems."

Editor's note: This story, posted Jan. 29, has been updated to reflect NASA's Jan. 30 announcement that contact with the IMAGE satellite has been made.