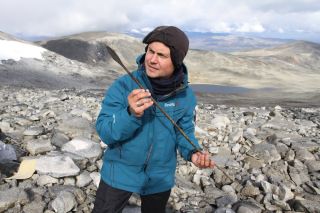 As ice patches melt away in Norway as a result of climate change, once-hidden treasures are coming into view, particularly ancient reindeer hunters' tools and belongings. But once these objects are exposed to the elements, they decay, sending archaeologists scurrying through the country's mountainous regions to collect the ancient tools before they disappear.

Now, after amassing more than 2,000 of these artifacts, archaeologists are using them — including iron- and bone-tipped arrows, walking sticks and shoes — to determine when and how people hunted reindeer in Norway's mountains over the ages.

For instance, there's a dip in the number of artifacts from the time when the plague hit Norway in the 14th century, but — surprisingly — not during the Late Antique Little Ice Age in the sixth and seventh centuries A.D., said study senior author James Barrett, an environmental archaeologist in the Department of Archaeology at the University of Cambridge, in England. [See photos of the reindeer hunters' weapons and clothes]

From 2006 to 2015, study lead researcher Lars Pilø, co-director of the Glacier Archaeology Program at Oppland County Council in Norway, led a team of archaeologists who searched for artifacts left behind by reindeer hunters in the mountainous region of Jotunheimen, in southern Norway.

Then, with the help of the Museum of Cultural History at the University of Oslo in Norway, the researchers studied and dated 153 of the objects with radiocarbon dating. The oldest artifacts dated to 6,000 years ago. Other discoveries included Iron Age arrows, a shoe from 1300 B.C., a tunic from A.D. 300, a wooden ski with binding dating to A.D. 700 and a walking stick with ancient runes carved into it, dating to the 11th century A.D.

Most of the arrows are iron-tipped and date from the period between the Roman Iron Age and the Middle Ages, Barrett said. The archaeologists also found scaring sticks, which are fence-like sticks put into the ground to guide spooked reindeer toward awaiting archers, he said.

In Norway, reindeer often live on ice patches during the summer months to avoid parasitic insects, Barrett said. Hunters followed the animals to these ice patches, and the artifacts the people left behind illustrate a complex history of demand for reindeer meat, fur and antlers, he said. These were used to make tools, such as combs, over the years.

When focusing on the past two millennia, from A.D. 1 to present day, the artifacts clearly correlate with societal changes, Barrett said. For instance, the first large artifact-wave happened in the third century A.D., right when settlements in the mountain valleys were expanding, he said.

Demand for reindeer kept up and wasn't interrupted by the Late Antique Little Ice Age in the Northern Hemisphere, which happened from the 530s to the 660s. (It's possible the little ice age prompted a small hiatus in reindeer hunting, but that didn't show up in the artifact analysis, Barrett said.)

Just before and during the Viking age (A.D. 800 to A.D. 1066), the demand for reindeer matched the demand for other natural resources, such as fish in the North Sea. This makes sense, as towns and trade in the region were growing, Barrett said.

After the Viking age, the number of artifacts dropped precipitously. But that doesn't mean fewer people were hunting reindeer, Barrett said. Rather, people had figured out more efficient ways of hunting; instead of going out in small groups with bows and arrows, they went out in large groups and built permanent structures, known as pitfall trapping systems, off the ice. This way, the people could run whole herds of reindeer off cliffs and then collect the spoils, Barrett said. [Fierce Fighters: 7 Secrets of Viking Seamen]

"It has been suggested that by the 1200s, this was having a serious impact on reindeer populations," Barrett said. "[These hunting techniques are] almost certainly why we see a falloff in finds from the ice patches, because hunting had shifted to these new, far-more-intensive methods that were not done by hunting with bows and arrows on the ice."

After the Black Death caused a dip in hunting artifacts, there was another (this time permanent) plunge in artifacts due to the spread of modern firearms, Barrett said.

The study was published online Jan. 24 in the journal Royal Society Open Science.