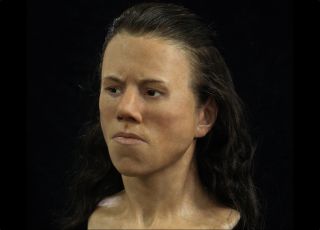 The final reconstruction, with lifelike silicone skin, reveals what the 18-year-old woman may have looked like some 9,000 years ago.
(Image: © Oscar Nilsson)

People of the Stone Age left behind no writing — no receipts, no poems and certainly no diaries. So we can't reconstruct the inner life of a young woman who lived 9,000 years ago. But if we could look into her eyes, could we at least better imagine what kind of person she might have been?

For the past two decades, Nilsson has been trying to re-create the individuals who populated history. From his studio in Stockholm, he has brought to life Viking men and women, a 1,200-year-old Wari queen from what is now Peru, and people who went down with the Vasa, a 17th-century ship that sank in Stockholm harbor just minutes into its maiden voyage. [See Photos of the Teen's Reconstruction]

His latest reconstruction, unveiled last week at the Acropolis Museum in Athens, is a sculpture of an 18-year-old woman dubbed Avgi, whose bones were left in the Theopetra cave in Greece 9,000 years ago.

Theopetra is located in central Greece, near Meteora, a famous formation of giant rock columns topped with Christian monasteries. Inside the north-facing cave, archaeologists have found traces of human presence — in the form of footprints, fireplace ashes, stone tools and bones — spanning 45,000 years. It's the only site in Greece with human occupation that ranges from the Middle Paleolithic to the Neolithic.

In the 1990s, archaeologists excavated the bones of a female teenager from the latter end of the Stone Age, around 7000 B.C. Orthodontist Manolis Papagrigorakis recently led an effort to reconstruct the teen's likeness, naming her after the dawn ("avgi") of civilization, and commissioned Nilsson to re-create her.

Nilsson couldn't work with the fragile, original skull, so the first step in his process was to have a synthetic copy of the skeletal remains made with a 3D printer. Next, he gathered information from scientists who have studied the bones to determine factors like the specimen's age, sex, ethnicity and estimated weight.

With these parameters, Nilsson says he had an idea about how thick the flesh and muscles on specific points of the face should be, and he sculpted layers of clay, reconstructing each muscle in a time-consuming process.

"When you reconstruct a face, it's very important not to project a face from your inner fantasy," Nilsson said. "You must let the face grow from the technique, from the skull."

There's only so much scientists can tell about the appearance of people based solely on their bones, however, even when ancient DNA is available. So, when Nilsson adds features to make his creations more lifelike — ears, prosthetic eyes, hair and silicone skin — he takes some artistic license.

"It is necessary to get the impression that there is something behind the eyes, that it actually has a soul," Nilsson said.

He emphasized that he doesn't want his creations to look like characters or stereotypes. He feels his sculptures best awaken the imagination when their facial expressions are somewhat inscrutable — appearing dour from one angle and pleased from another.

"Often, when you go to a museum and read the text and perhaps see a skull, you don't get social contact with history," Nilsson said. "But history is made up of people, and to meet these people brings history to life."