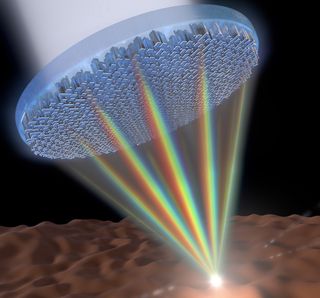 This flat metalens can focus nearly the entire visible spectrum of light in the same spot and in high resolution.
(Image: © Jared Sisler/Harvard SEAS)

Physics could soon make it possible to replace those bulky, heavy, glass lenses on cameras with wafer-thin "metalenses" — materials microscopically engineered to focus light at a fraction of the weight and size of traditional lensing.

A team from Harvard University's school of engineering has designed a metalens that can focus nearly the entire spectrum of visible light, the researchers reported Jan. 1 in the journal Nature Nanotechnology. Previous metalenses could focus only narrow color wavelengths, or wavelengths outside the visible spectrum. [Rainbow Album: The Many Colors of the Sun]

When light moves through glass, the different wavelengths (colors) that make up the light slow at different rates. This causes their paths through the glass to bend, or diffract, differently, so that they separate. Pass a beam of white light through a prism, and this effect will cause a rainbow to burst out the other end. This presents a challenge to lens makers; a single focusing element will project an image that has colors from red to violet hitting different spots on the film or sensor.

So, modern camera lenses use many different glass elements to correct and reverse that effect, pushing the different wavelengths of light back onto a single focal point — and even that doesn't work perfectly; many photographers know the pain of buying an expensive lens only to find a violet fringe of chromatic aberration around the subjects in their photographs. And all that glass, aberration-correcting bulk can get heavy.

A metalens takes a different approach to focusing light. Instead of exploiting the diffraction properties of glass, a metalens uses nanofins — tiny structures, typically made of titanium dioxide — to bend wavelengths toward the metalens focal point.

In the past, though, metalenses could bend just one wavelength at a time, or in more advanced cases, a narrow band of the visual spectrum. The newly created metalens bends nearly the full spectrum of light by combining nanofins tuned to different wavelengths on a single surface.

Metalenses have other challenges to overcome before they can compete seriously with traditional glass. The most significant one: resolution, according to the journal article. None of the metalenses demonstrated so far are particularly sharp compared with their best glass competitors. But, again, as the technology progresses, it could address that limitation.

Metalenses might not land on store shelves anytime soon, but they are coming.