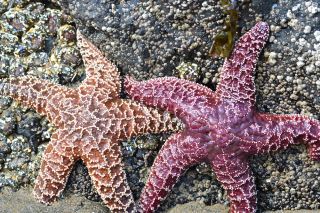 For the past four years, a mysterious syndrome has been killing millions of sea stars along the West Coast, turning the five-armed critters into piles of goo. But now, the sea stars appear to be making a comeback, according to news reports.

In Southern California and elsewhere, the palm-size sea stars are showing up in record numbers, compared with the past few years, The Orange County Register reportedon Tuesday (Dec. 26).

"They are coming back, big time," Darryl Deleske, an aquarist for the Cabrillo Marine Aquarium in San Pedro, told The Orange County Register. "It’s a huge difference … A couple of years ago, you wouldn’t find any. I dove all the way as far as Canada, specifically looking for sea stars, and found not a single one." [In Photos: Sick Sea Stars Turn to Goo]

It's unclear what causes the syndrome, but researchers suspect it may be a virus infecting sea stars from the coastal waters of Mexico all the way up to Canada and even Alaska, according to a map tracking the syndrome's spread. The syndrome has killed ochre stars, mottled stars, leather stars, sunflowers, rainbows and six-armed stars, according to the Associated Press.

However, the sea stars are bouncing back, at least in parts of Southern California. Moreover, last year scientists discovered a sea star baby boom blooming off the Oregon coast, Live Science previously reported.

The recent mass die-off isn't the first to strike West Coast sea stars. The region also experienced sea star population death spirals in the 1970s, 1980s and 1990s, although these die-offs were smaller and more geographically contained than the one that began in 2013, according to a report from the University of California, Santa Cruz.

Although the news of the rebound is encouraging, the stars aren't out of the woods yet. The wasting syndrome is still infecting starfish in Northern and Central California, and it has returned to the Salish Sea, an area bordering northern Washington and southern British Columbia, according to the Santa Cruz report.