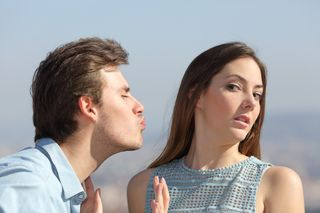 All animals reproduce, but only humans swipe left.

For many people, rejection and disappointment are necessary evils of dating. These feelings can be discouraging, but a new study suggests that the emotions may be far more common than they seem on those loneliest of nights.

In the study, the researchers found that roughly 50 percent of people have trouble finding or keeping a romantic partner. And if this characterization applies to your life, the study authors offer a glimmer of encouragement: It's not you — it's evolution. [13 Scientifically Proven Signs You're in Love]

"Nearly 1 in 2 individuals faces considerable difficulties in the domain of mating," said lead study author Menelaos Apostolou, an associate professor of social sciences at the University of Nicosia in Cyprus. "In most cases, these difficulties are not due to something wrong or broken, but due to people living in an environment which is very different from the" environment they evolved to function in.

In the new study, which was published online in the journal Personality and Individual Differences in October, Apostolou and his colleagues surveyed nearly 1,900 university students about their personal performance in dating. The students were asked how strongly they agreed or disagreed with statements such as "I find romantic relationships difficult" and "I find it easy to keep a romantic relationship."

The researchers found that about 1 in 2 respondents admitted it was hard to either start or maintain a relationship. What's more, 1 in 5 said they experienced difficulties in both starting and maintaining relationships.

From an evolutionary perspective, it seems counterintuitive that a behavior as important as mating would prove so challenging for so many individuals. But the reasons may be rooted in a social science phenomenon known as the "mismatch problem," Apostolou told Live Science. Though humans are generally skilled at adapting to new conditions, it can take many generations to dramatically alter our behavior, he said. So, by the time humans properly adapt to one set of new conditions, their environment may have already changed significantly, in ways that they're not prepared for.

For modern daters, the social and technological advances of the last 200 years may be a greater amount of change than humans are equipped to deal with, Apostolou said.

"There are reasons to believe that most of the adaptations we carry with us today evolved in an environment where mate choice was more regulated — i.e., marriages were arranged," Apostolou said. (Arranged marriages were a worldwide norm before the 18th century, according to the Encyclopedia of Gender and Society, and they are still common in many cultures today.) "The environment has changed drastically and recently, so we had no time to adapt to modern conditions," he added.

One trait that may have better served arranged courtship is introversion, a personality type marked by shyness in social settings and that may apply to roughly 20 percent of the population. "Being very introverted and shy was not a problem in the past, because you would not have to go out finding a spouse," Apostolou said. "Your parents would do so for you."

Today, of course, most people date based on personal preference and seek their own mates for themselves. In this context, social shyness can be debilitating to romantic success, and it is not a behavior easily changed, Apostolou said.

With technology rapidly altering modern dating rituals, Apostolou said he thinks the only way to combat the mismatch problem is to understand it better. "My opinion is that we need to allocate research efforts in identifying the mechanisms responsible for poor mating performance and develop ways that will make them work in a more optimal range for the modern context," Apostolou said.

In the meantime, hard-luck daters should try to take solace in the study's findings, he said. If you are lonely, "you are not the only one," Apostolou said. "Nearly 1 in 2 face the same problem."