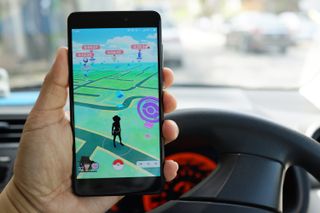 When "Pokémon Go" launched back in July 2016, people took to the streets in swarms to catch Pikachus and train Bulbasaurs. But catching 'em all was harder for people in rural areas, where the augmented-reality game's hotspots were more spread out, and sometimes accessible only by car.

So, many players in rural areas got behind the wheel to seek out their favorite Pokémon in the wild — a decision that appears to have led to a spike in car accidents near popular in-game hotspots, a new study finds.

In the study, which was shared online Nov. 21 but has yet to be published in a peer-reviewed journal, researchers from the Krannert School of Management at Purdue University in Indiana looked at a sudden increase in car accidents in the state's Tippecanoe County in the months following the game's launch. [9 Odd Ways Your Tech Devices May Injure You ]

The researchers focused accidents that were near "PokéStops" — places where users can snag in-game items such as Poké Balls — and calculated that, because people were trying to cash in on the PokéStops while driving, the amount of car crashes in the county increased by 134 over the 148 days after the game was released.

To figure out how many car crashes were caused by "Pokémon Go," the researchers used data from insurance claims and police reports. Between March 1, 2015, and Nov. 30, 2015, there were more than 11,300 car accidents that also had geographic data available. By comparing the geographic data to the locations of PokéStops or Pokémon gyms, the researchers found that 20 percent of all crashes happened within 330 feet [100 meters] of a PokéStop, while only 7 percent happened near a Pokémon gym. Gyms are where players train and battle Pokémon, so generally more time is spent at a gym than a PokéStop.

The researchers said that because they compared the number of crashes in specific areas before and after the launch of the game, they can be sure that the accidents were caused by people deliberately driving past a PokéStop to play the game. Most studies on distracted driving simply calculate the number of accidents in an area or caused by an app, according to the paper.

To calculate the exact number of extra accidents, the researchers multiplied the daily rate of accidents by the number of PokéStop-adjacent crashes in the county by the number of days they were measuring. Ultimately, they found that "Pokémon Go" was responsible for 47 percent of the increase in car accidents over the expected baseline.

But this spike in car accidents was limited to areas around PokéStops, not gyms. The number of accidents that occurred near gyms was about the same as what would have been expected had the game never been launched, lending further credence to the idea that the spike in accidents near PokéStops was caused by "Pokémon Go" players. Because more time is spent at a gym compared to a PokéStop, it's unlikely that a player could simply drive past the gym to fully engage with it.

Moreover, when the researchers narrowed the time frame to just the week after launch, they found an even stronger association between car accidents and PokéStop locations, compared with the same window in the previous year.

The researchers noted that most of the accidents caused by "Pokémon Go" players tended to be less severe than others, though there were two deaths linked to game-related crashes.

The accidents could be less severe for a number of reasons, according to the study. For example, players might have deliberately slowed down to make sure they had enough time to collect items from the PokéStop before passing it. In addition, many of the PokéStops in Tippecanoe County are found near parks, cemeteries, memorials and other places with reduced speed limits, the researchers wrote. The game enforces a speed limit — meant to dissuade people from playing while driving — that makes it impossible to interact with the virtual world while moving too quickly.