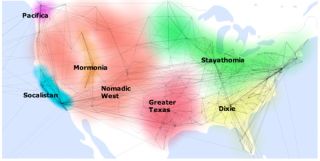 A breakdown of American Facebook communities according to a recent analysis by an ex-Apple engineer.
(Image: © Pete Warden)

Facebook users in the American West appear to move around a lot, and often have friends throughout the country, while users from Minnesota to Manhattan have connections much closer to home.

And in areas in and around Texas, on the edge of what’s generally thought of as the Bible Belt, the Dallas Cowboys rank higher overall on users’ fan pages than God.

These are just some of the interesting findings about Facebook users recently discovered by Pete Warden, a Colorado-based, British-born ex-Apple engineer who has spent the last six months gathering and analyzing data from more than 215 million public Facebook profile pages.

What he’s discovered just might shed more light on the culture of connected America than the 2010 census.

"If you actually look at [Facebook user data] in the aggregate, it's like a painting," Warden told TechNewsDaily. "Each individual data point isn't interesting, but when you step back and look at the trends in millions of profiles, you start to see some pretty interesting pictures emerging."

Warden says he's been overwhelmed by the response he’s gotten from this project, after working on similar projects in obscurity for years.

Among Warden's less surprising findings: Fox News host Glen Beck gets the number one spot on Facebook fan pages from users in Eastern Idaho.  And the "Twilight" books, penned by Mormon author Stephenie Meyer, rank high in the heavily Mormon communities in and around Utah.

These and other observations that Warden mined from the massive amount of Facebook data were posted on his blog last week, along with maps that break down the U.S. into seven regions based on Facebook user trends.

Now, after gathering the data from Facebook’s site using software he designed and honed in the process, and making a first round of enticing observations, he wants to turn the raw data he’s culled over to academia for further analysis. But he also hopes to steer investors and customers to his own software and services for further data gathering and aggregation.

"I'm much better at building the pipeline for processing the data than I am at doing really rigorous stuff with the results that come out at the end," Warden said in a telephone interview. "The patterns that I've blogged about in the U.S. data are very qualitative."

Indeed, much of the conclusions that Warden has drawn are open to interpretation, and his given names for America’s regional social connection groups – "Stayathomia" (the Northeast), "Socalistan" (Souther California), and "Mormonia" (the predominantly Mormon towns in Utah and Eastern Idaho) among them – are playfully clever, but not very scientific.

But Warden is serious when it comes to people’s privacy concerns, even though all the data being gathered is publicly available on Facebook’s site, and can be found via Google. He says he wants to make the data useful for large-scale data analysis, but not for tracking down individuals.

"We want to make sure we don't help scammers, we don't help spammers, and we respect people's privacy," Warden said, "but also allow some sort of new insight to come out of this."

To that end, Warden has delayed releasing the data for the time being (he initially intended to release it yesterday, Feb. 9), after someone from Facebook contacted him, asking for some time to check the privacy implications.

Once Facebook clears the data for release to the academic world, Warden says he’s ready to pass the task of interpreting all this data on to others and feature their conclusions on his blog more often than his own.

Meanwhile, Warden has some problems to patch in his data pipe, problems that have been helpfully pointed out by readers of his blog.

"One of the great things about getting this out there is having thousands of pairs of eyes to look over this stuff, like the fact that [the data shows] the top name in Alexandria, Louisiana is Mohamed," Warden said.

"When somebody pointed out that some of the profiles seemed to be coming from Alexandria, Egypt, that was a head-slapping moment."