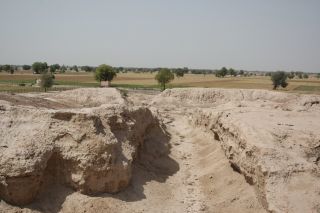 An excavated street at the Indus site of Kalibangan, a Bronze Age settlement that sits right along the Ghaggar-Hakra paleochannel, visible in the background.
(Image: © S. Gupta/Imperial College London)

Almost 5,000 years ago, a civilization developed in what is today northwest India and Pakistan, rivaling Mesopotamia and ancient Egypt in scope. The people of the Indus civilization farmed everything from cotton to dates, and eventually established at least five major cities with basic indoor plumbing and public sewage systems.

A few of these cities, including the famed sites of Harappa and Mohenjo-Daro, sit along major glacier-fed rivers. But the bulk of the Bronze Age Indus villages that have been found so far sit far from flowing water, north of the Thar Desert and between the Ganges-Yamuna and the Indus river systems. As early as the late 1800s, archaeologists and geologists noted a dry paleochannel, like an old riverbed, which ran through many of these settlements. The assumption was that the settlements first grew alongside the river, and then dried up when the river did.

Now, new research reveals that this old story is entirely wrong. In fact, the river that once filled the dry channel dried up more than 3,000 years before the heyday of the Indus civilization. Instead, the ancient people who populated those villages may have relied on seasonal monsoon flooding and the rich, water-trapping clays of the old river valley for a flourishing system of agriculture. [24 Amazing Archaeological Discoveries]

"They were able to survive in a very diverse landscape," said lead study researcher Sanjeev Gupta, a sedimentologist at Imperial College London. "It makes it a richer story."

Gupta and his colleagues have been working to unravel the mystery of the paleochannel, called the Ghaggar in India and the Hakra in Pakistan, for a dozen years.

"What we set out to do was to do a detailed geological analysis to underpin the archaeological understanding," Gupta told Live Science. This involved first combining various satellite views of the region with radar imagery to build detailed topographical maps of the dry channel.

Next, a field team headed by Rajiv Sinha and Ajit Singh, of the Indian Institute of Technology Kanpur, took sediment samples from the paleochannel at the Indus site of Kalibangan, which sits right alongside the dry channel. This was a painstaking process, Gupta said. The team drilled down 131 feet (40 meters) in the sandy soil. To extract unbroken cores of sediment that wouldn't crumble, they had to drill 3.3 feet (1 m) at a time, removing long columns of sand and soil in opaque barrels. They drilled five cores, and each one took about a week to collect. [The World's 10 Longest Rivers]

The tedium of the collection process was nothing compared with the detailed work that would take place back at the lab. The researchers sliced the cores in half lengthwise so that they could use one semicircular half to analyze the types of sediment and the other to undergo a barrage of sophisticated analyses to reveal ages.

The first revelation delivered by the sediments was that the paleochannel was, indeed, once a river.

"We found these beautiful river deposits with all the hallmarks of Himalayan rivers," Gupta said, including dark-brown and gray sands washed down from the rugged mountains. To figure out which river had brought these mountainous deposits down, the researchers used dating techniques to figure out the ages of two minerals in the sands: mica and zircon. Analyzing thousands of grains (the mica alone took six straight weeks of 24-hour work), the team found that the ages of the sediments matched one river, and one river alone: the Sutlej, which now flows in a westerly direction across the Punjab region.

The discovery reveals that the Sutlej once flowed through the now-dry paleochannel but shifted course at some time during history. This process, called avulsion, happens occasionally with rivers. But when had the Sutlej avulsed?

To find out, the researchers used another sophisticated technique, called optically stimulated luminescence. When grains of sediments like quartz or feldspar are buried, Gupta explained, they are exposed to background radiation in the surrounding soil, which excites electrons in the minerals. These excited electrons accumulate with time, creating a sort of natural stopwatch that measures the time since the sediment was last exposed to sunlight.

Using this technique, the researchers dated their five Kalibangan cores, along with six other cores from other locations along the former Sutlej path. What the results showed, Gupta said, was that in the period from 4,800 to 3,900 years ago, when the Indus villages were at their peak, the sediments were dominated by fine sands and muds.

"These are low-energy river environments or lakes," Gupta said. "So there's no big Himalayan river."

Put it together, and it adds up to this: The Sutlej once ran through the old channel, washing down glacial sediments and probably bringing raging seasonal floods to the region. But the dating showed that between 15,000 and 8,000 years ago, the Sutlej changed course. No one knows why, Gupta said, but the course change left behind a low-lying river valley, rich in groundwater and likely fed by small, seasonal monsoon rivers that would inundate the valley in fertile mud. In addition to being a safer place to live than next to a raging glacial river, the valley was fertile. [7 Ancient Cultures History Forgot]

"We think, actually, that these towns and settlements developed here because this was actually a good place for agriculture," Gupta said.

The study is impressively well-documented and gives archaeologists concrete data to use going forward, said Rita Wright, an expert on the Indus civilization at New York University who was not involved in the study. Archaeologists have become increasingly sensitive to the ecological diversity of the Bronze Age Indus people, Wright told Live Science, but the new information about water resources could change the way researchers think about Indus settlement patterns. With no rivers in the Ghaggar-Hakra channel area, ancient people may have moved around in pursuit of water rather than staying in villages for generations, for example.

"As an archaeologist, when I read this, I thought, 'Oh, maybe that's why there are so many documented settlements there. Maybe they were ephemeral," Wright said.

The region is still India's breadbasket, Gupta said. Groundwater still feeds agriculture in the area, but the groundwater has been depleted. The research team is now working on a project to understand how the groundwater flows and how it can best be managed in the future.

"Water resources are still fundamental, then to now," Gupta said.

The research was published today (Nov. 28) in the journal Nature Communications.