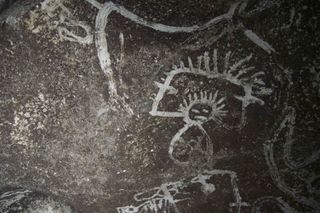 A depiction of a man rubbed into a Mona Island cave wall at least 500 years ago.
(Image: © Unversity of Leicester / Alice Samson)

Imagine a social-networking site that predates not only the internet but even a European presence in the Americas. That's how researchers from the University of Leicester are describing the discoveries they've made after three years of excursions deep into the narrow caves of an abandoned Caribbean island.

The caves, which were on the island of Mona between the Dominican Republic and Puerto Rico, contained thousands of never-before-seen wall posts, the researchers said. And this indigenous spiritual artwork gave the scientists a new glimpse into pre-Columbian life on Mona Island.

"For the millions of indigenous peoples living in the Caribbean before European arrival, caves represented portals into a spiritual realm," Jago Cooper, an archaeologist from the British Museum who worked on the research, said in a news release. "Therefore, these new discoveries … [capture] the essence of [the artists'] belief systems and the building blocks of their cultural identity." [See Images of Mona Island's Cave Art]

To analyze the cave drawings, thee archaeologists took X-rays and used carbon dating. They were surprised to find that all of the artwork discovered in about 70 winding caves predated Christopher Columbus arriving in the Americas. Indeed, some of the artwork that had already been discovered was assumed to be much more recent, as cave art from pre-Columbian times would have been expected to be decayed or faded more than it had, according to the new findings, published online Oct. 27 in the Journal of Archaeological Science.

"The preservation can be unusual because they're relatively stable environments," Stephen Houston, an archaeologist and anthropologist who serves as the director of Early Cultures at Brown University, told Live Science. "There are big issues here having to do with the nonobvious cultural choices they made," said Houston, who didn't work on the study. He explained that often, indigenous populations would make the obvious choice for their cave pigmentation. In his study on the cave art made by Mayans, he found that they would mix the charcoal from their torches with water and call it a day. But according to this new research, specific plants and other organic materials were brought into the caves of Mona Island specifically to make new paints.

In fact, people must have returned to the caves to add new artwork over the course of the 13th through 15th centuries, according to the study. The researchers noted that the indigenous people of Mona Island believed that the sun and moon emerged from beneath the ground, so exploring deep into the expansive network of subterranean caves became a highly spiritual act.

Other images in the caves were made with advanced paints that varied based on the unique components of each cave, according to the research.

These paints contained varied levels of charcoal, bat droppings, plant gums, different minerals like iron and plant material from native trees like Bursera simaruba, also known as the turpentine tree. The researchers concluded that the paintings were likely prepared in advance, and then charcoal from torches were likely added to artwork afterward.

"Most of the precolonial pictographs are in very narrow spaces deep in the caves, some are very hard to access, you have to crawl to get to them, they are very extensive and humidity is very high but it is extremely rewarding," Victor Serrano, an archaeology doctoral candidate from the University of Leicester who worked on the research, said in a statement.

Because the indigenous people of Mona Island were wiped out by European invaders, physical and cultural analysis of the new cave paintings are one way people can learn about what they were like and how they lived. Because the art found in the Mona caves are so well-preserved, researchers may glean new insight into the lifestyle of a lost culture. But because the Spaniards so thoroughly suppressed the culture of the native Taíno people, this will be hard to do, Houston said.

"You would need other records" to understand why the Taíno chose to include certain ingredients, Houston said. "You would need to know local beliefs and practices with respect to that plant. There are descendants of these people the Taíno, but the Spanish were particularly thorough in eliminating their local beliefs."

For example, Houston pointed out other research conducted by Cooper that found distinct Spanish names and religious phrases in some of the caves on Mona Island. While it's unclear whether the Christian theology was added to what were clearly spiritual areas to the Taíno, it could have been to suppress the local culture, create a hybrid, or even just a form of graffiti once the Spaniards learned about the decorated caves.