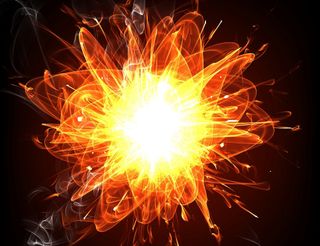 A pair of physicists announced the discovery of a subatomic event so powerful that the researchers wondered if it was too dangerous to make public.

The explosive event? The duo showed that two tiny particles known as bottom quarks could theoretically fuse together in a powerful flash. The result: a larger subatomic particle, a second, spare particle known as a nucleon, and a whole mess of energy spilling out into the universe. This "quarksplosion" would be an even more powerful subatomic analog of the individual nuclear fusion reactions that take place in the cores of hydrogen bombs.

Quarks are tiny particles that are usually found clinging together to make up the neutrons and protons inside atoms. They come in six versions or "flavors": up, down, top, bottom, strange and charm.

Energetic events at the subatomic level are measured in megaelectronvolts (MeV), and when two bottom quarks fuse, the physicists found, they produce a whopping 138 MeV. That's about eight times more powerful than one of the individual nuclear fusion events that takes place in hydrogen bombs (a full-scale bomb blast consists of billions of these events). H-bombs fuse together tiny hydrogen nuclei known as deuterons and tritons to create helium nuclei, along with the most powerful explosions in the human arsenal. But each of those individual reactions inside the bombs releases only about 18 MeV, according to the Nuclear Weapon Archive, a website devoted to collecting research and data about nuclear weapons. That’s far less than the fusing bottom quarks’ 138 MeV. [Beyond Higgs: 5 Elusive Particles That May Lurk in the Universe]

"I must admit that when I first realized that such a reaction was possible, I was scared," co-researcher Marek Karliner of Tel Aviv University in Israel told Live Science. "But, luckily, it is a one-trick pony."

As powerful as fusion reactions are, a single instance of fusion on its own isn't at all dangerous. Hydrogen bombs derive their enormous power from chain reactions — the cascading fusion of lots and lots of nuclei all at once.

Karliner and Jonathan Rosner, of the University of Chicago, determined that such a chain reaction wouldn't be possible with bottom quarks, and, before publishing, privately shared their insight with colleagues, who agreed.

"If I thought for a microsecond that this had any military applications, I would not have published it," Karliner said.

To spark a chain reaction, nuclear bomb makers need large stockpiles of particles. And an important property of bottom quarks makes them impossible to stockpile: They wink out of existence just 1 picosecond after they're created, or in about the time it takes light to travel half the length of a single grain of salt. After that time span, they decay into a far more common and less energetic kind of subatomic particle, known as the up quark.

It might be possible to generate single fusion reactions of bottom quarks inside miles-long particle accelerators, the scientists said. But even inside an accelerator, one couldn't assemble a large enough mass of quarks to do any damage out in the world, the researchers said. So there’s no need to worry about bottom quark bombs. [7 Strange Facts About Quarks]

The discovery is exciting, though, because it's the first theoretical proof that it's possible to fuse subatomic particles together in ways that release energy, Karliner said. That's brand-new territory in the physics of very tiny particles, made possible by an experiment in the Large Hadron Collider at CERN, the massive particle-physics laboratory near Geneva.

Here's how the physicists made this discovery.

At CERN, particles zip around a 17-mile-long (27 kilometers) underground ring at near light speed before smashing into one another. The scientists then use powerful computers to sift through the data from those collisions, and strange particles sometimes emerge from that research. In June, something especially strange turned up in the data from one of those collisions: a "doubly charmed" baryon, or a bulky cousin of the neutron and proton, itself made up of two cousins of the "bottom" and "top" quarks known as "charm" quarks.

Now, charm quarks are very heavy compared to the more common up and down quarks that make up protons and neutrons. And when heavy particles bind together, they convert a large chunk of their mass into binding energy, and in some cases, produce a bunch of leftover energy that escapes into the universe. [Wacky Physics: The Coolest Little Particles in Nature]

When two charm quarks fuse, Karliner and Rosner found, the particles bind with an energy of about 130 MeV and spit out 12 MeV in leftover energy (about two-thirds of the energy of deuteron-triton fusion). That charmed fusion was the first reaction of particles on this scale ever found to emit energy in this way, and is the headline result of the new study, published yesterday (Nov. 1) in the journal Nature.

The even more energetic fusion of two bottom quarks, which bind with an energy of 280 MeV and spit out 138 MeV when they fuse, is the second, and more powerful of the two reactions discovered.

So far, these reactions are entirely theoretical and haven't been demonstrated in a lab. That next step should come soon though. Karliner said he expects to see the first experiments showing this reaction at CERN within the next couple years.

Editor's Note: This article was updated to correct a statement saying that top quarks make up neutrons and protons. Up and down quarks make up protons and neutrons.